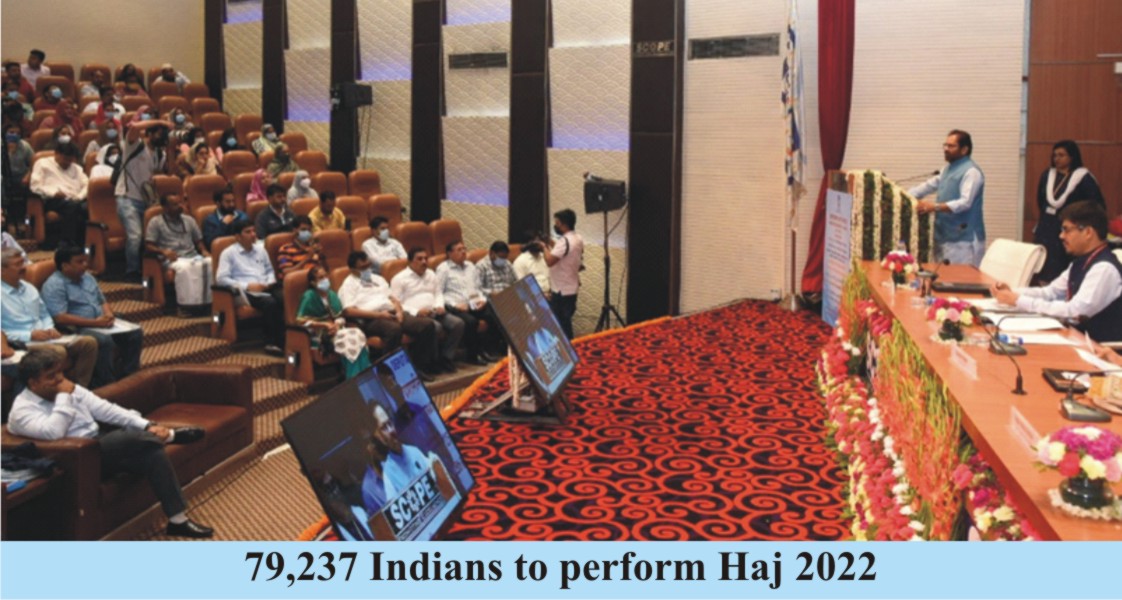 New Delhi: For the first time after the Covid-19 pandemic broke out in 2019, as many as 79,237 Indian pilgrims will be able to perform Hajj this year. The Saudi Government stated that only one million people from all over the world would be allowed to do Hajj this year, following the easing of most of the restrictions imposed during the pandemic and the restoration of life in the Kingdom to what it was before 2020.

Inaugurating a two-day orientation-cum-training programme for Haj 2022 deputationists here on May23-24, Naqvi said the entire HGO procedure has also been made transparent and accessible online and added that around 2000 Muslim women will perform Haj in 2022 without a “Mehram” (male companion) who will go to Haj without lottery system.

The Saudi Government has not allowed the entry of foreign pilgrims since 2019. In 2021 the capacity was limited to 60,000 citizens and residents who received the vaccine due to the imposed measures to curb the pandemic.

This year, Indonesia was given a quota of 100,051 pilgrims by the Saudi Government, followed by Pakistan with 81,132 pilgrims and India with 79,237 pilgrims. With a quota of 57,585, Bangladesh will send the fourth-largest number of pilgrims.

The Haj 2022 is taking place with substantial reforms, and the health and well-being of Haj pilgrims are being given first priority.

Continuing his speech, Naqvi said the Haj 2022 process has been planned according to the Indian and Saudi governments’ respective guidelines. These include eligibility conditions, age limits, and health-related limitations, among other things.

He said that significant government reforms in the Haj process have made the process totally transparent and that the Indian Government has made arrangements to ensure that Haj pilgrims performing Hajj after two years are not burdened financially.

The 100% digital/online Haj process has realized Indian Muslims’ desire to “Ease of Doing Haj” and is one of the best examples of “Digital India.”

Making the entire Haj procedure digital/online, including the Digital Health Card, the “E-MASIHA” health facility, and “E-luggage pre-tagging,” and offering all information about accommodation and transportation in Makkah-Madina to Haj pilgrims in India itself.

Speaking on occasion, Naqvi said that the Government had ended the “political deceit of Haj subsidy” with transparency and commitment to “Decisions with Delivery.”

However, since the BJP came to power in 2014, the cost of performing the Hajj or Umrah pilgrimages has risen to an unsustainable level, with the Government unexpectedly discontinuing the Haj travel subsidy in 2017, ignoring a Supreme Court injunction to phase out the subsidy progressively by 2022. In addition, the Government failed to comply with a court decision to provide a one-time subsidy for the advancement of minority girls’ education.

In the two-day training programme, Haj deputationists were given all the information about Haj pilgrimage, accommodation in Makkah and Madina, transport, health facilities, safety measures, etc.

According to reports, the Indian Haj Committee has received applications from over one lakh pilgrims. Now that India has been allocated a quota of 79,237 pilgrims, the final list will be compiled using a draw (lottery also called Haj Qurrah).

The Indian pilgrims will travel through the Haj Committee of India from ten embarkation points: Ahmedabad, Bengaluru, Cochin, Delhi, Guwahati, Hyderabad, Kolkata, Lucknow, Mumbai, and Srinagar for Haj 2022. Flights for Haj 2022 will begin on June 4th.

Depending on the state from which the pilgrim departs, hajj packages in India can range from INR 330,000 to 370,000 (USD $4,421 to $4957). By 2022, the cost of performing the Hajj or Umrah pilgrimages in Makkah, Saudi Arabia, is likely to rise. The main causes of this increase in expenses are inflation and COVID-19 restrictions.