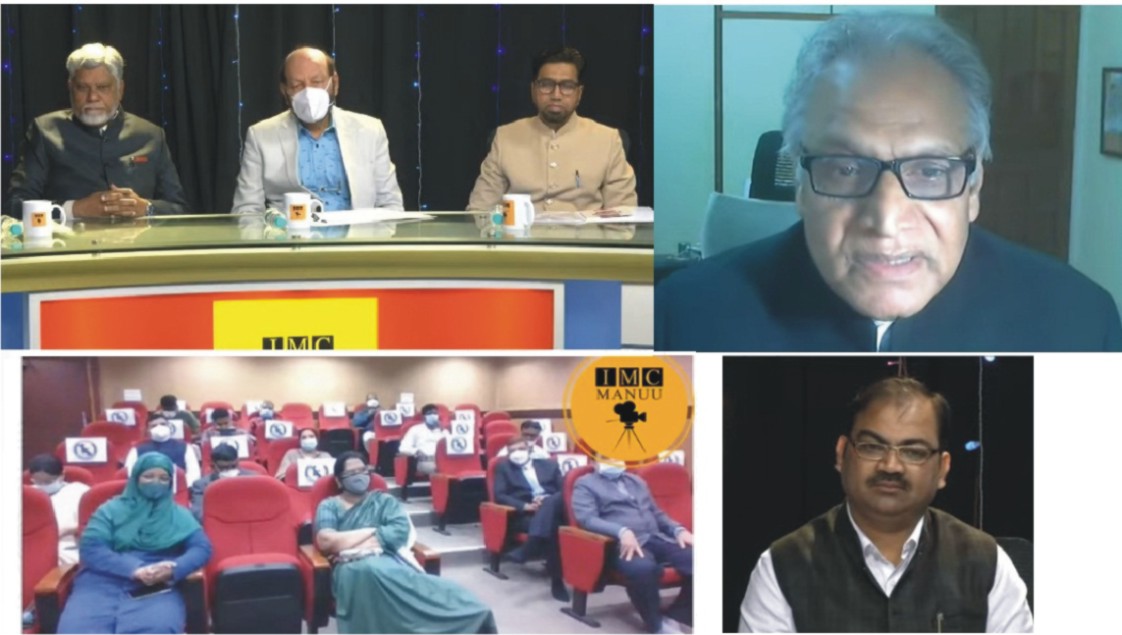 Financial Difficulties Compel 70% Muslims to Drop Out of Higher Education

New Delhi/Hyderabad: Internal disparities exist among Muslims in terms of higher education attainment, which are based on income level, gender, and educational medium, and institutions such as MANUU must prioritize such groups through scholarships, differential fee structure, hostel facilities, and remedial coaching classes. These observations were made by Prof. Sukhdeo Thorat, Emeritus Professor, Centre for the Study of Regional Development, Jawahar Lal Nehru University and Former Chairman, University Grants Commission, while delivering a lecture on “Where do the Muslim lag behind in higher education?: Lessons for policies”. He spoke as chief guest on the 25th Foundation Day of the Maulana Azad National Urdu University (MANUU), Hyderabad, on January 9, 2022.

Prof. Thorat urged MANUU to begin special courses and diplomas to stimulate manufacturing and business/trade, mainly through distance learning. As more than half of Muslims come from self-employed households, this will lower the drop-out rate among Muslims (15.6 percent), which is the second-highest in the country (the national average is 12.6 percent).

Citing the latest figures from the National Sample Survey, 2017-18, Prof Thorat said 70 percent of Muslim students are compelled to drop out of higher education due to financial difficulties. He said there was discrimination in the thoughts of Muslim youth regarding appointments in government and private sector employment while assessing the causes for the worrying under-representation of Muslims in the government and private sector. Anxiety also makes it difficult to pursue further education. Prof Thorat also stressed the importance of a government-led proactive and progressive approach to increasing the proportion of Muslims in higher education. Referring to his long association with Urdu University, he expressed satisfaction and expansion over the extraordinary development of the University.

Prof Thorat recommended that Urdu University take proactive measures to enhance female enrollment and ensure that impoverished students receive an education. Because most students who are compelled to drop out of higher education are from small business families, the institution may also start short-term courses to promote business and entrepreneurship. He suggested that the University set aside special reduced tuition fees to assist such students. At the conclusion of his talk, he also took questions.

In his presidential address, Vice-Chancellor Prof. Syed Ainul Hassan described Prof. Thorat’s eye-opening talk as the perfect start to MANUU’s Silver Jubilee celebrations. He said that Urdu is MANUU’s identity and the medium and will stay so. He emphasized the importance of partnership with other institutions for the University’s development, noting that the guest speaker spoke about gender equality and that MANUU is also attempting to achieve so. The percentage of Muslims in higher education is relatively low, at 16.6%, and it must be increased. He further said that MANUU is doing its best to tackle some of the issues raised by Prof. Thorat. For this purpose, the University is developing coordination with other institutions and experts. He claimed that, despite MANUU’s mission to promote Urdu rather than offer work, the institution held its inaugural job fair on January 6, which had to be postponed owing to Covid-19.

Earlier, Prof. S.M Rahmatullah, Pro-Vice-Chancellor, introduced the Chief Guest and threw light on the objectives of the University and the background of its establishment. He also underlined Prof. Thorat’s role in developing MANUU, in its initial years, during his tenure as Chairman UGC.

Referring to the origin of Urdu, he said that a military language was created through the fusion of Indo-Aryan languages. Today people know it by the name of Urdu. As it developed, it also became the language of government and the medium of instruction. Then it deteriorated, and the religious schools became the cause of its survival.

As a result, Urdu University was founded to ensure Urdu’s survival and development. The University has a critical role to play in promoting Urdu.

A special Montage prepared by Instructional Media Centre was also released to mark the beginning of Silver Jubilee Celebrations.

Prof. Siddiqui Mohd. Mahmood, the Registrar, said that MANUU is not just an institution but a movement. He described the foundation Day as a day of self-evaluation.