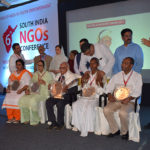 Bengaluru: Five noted social workers were presented with Social Service Awards on March 18 in the city, synchronizing with the 6thNGOs Conference of South India. The awardees are Dr. Sheik Ali, former Vice Chancellor of Mangalore and Goa Universities and founder of several educational institutions in Mysore); Mamoon Akhtar from Kolkata, who heads the Samaritan Help Mission and has organized education for children of four lakh population in slums in Kolkata; Rehana Begum from Turuvekere, who treats snakebite victims; Harekala Hajabba, an orange seller from DK District, Karnataka who has set up a school in a village; and, Salma Memon, who works among underprivileged sections of children and women in Mumbai. The awards were presented by Mr. Tanweer Sait, Minister for Primary and Secondary Education at the conference.
Introducing the awardees Mr. Ameen-e Mudassar, CEO of Cigma Foundation, said the committee found these individuals rendering yeoman service to the community in various parts of the country. He noted that by recognizing their services the community can inspire younger people to emulate their example and be of help to others.
Speaking on the occasion, Tanweer Sait called upon Muslims to motivate the youth for empowerment of the community and render help to all people, regardless of community and faith.