A group of more than 250 youth from different walks of life in Hyderabad, Bangalore and Chennai united for the cause of spreading love by distributing gifts to public servants in their city on the day of Eid and the next two days. They reached out to nearly 10000 public servants of other faiths who serve the nation all year long. The public servants were from the police department, Metro staff, Pourakarmikas, RTC drivers and conductors, Telecom staff, MWSSB staff, Auto Drivers, ATM security guards, Post Office personnel, Security personnel, Railway Station Staff, Govt Hospital Staff, Media Houses, Bank Staff, Fire Station Staff, Govt School Staff, Govt College Staff, Passport Office Staff, Spastic Society inmates, Schools for Physically Challenged and others. Before handing the sweet box that had an ‘Eid Mubarak’ sticker on it in three languages, the volunteers said, “This is a token of appreciation for your services. Eid Mubarak”. This trend called # Gifting sunnah started in 2018 where 400 people received the gifts in Bangalore. This year it has spread to three cities in different states.
Gifting is a sunnah of the holy Prophet. About gifting, the Prophet has said, “Exchange gifts, as that will lead to increasing your love for one another” and also “He who does not thank people has not thanked Almighty God”.So, to spread love and to thank people, the youth mobilised money from friends, well-wishers and others via crowd funding. 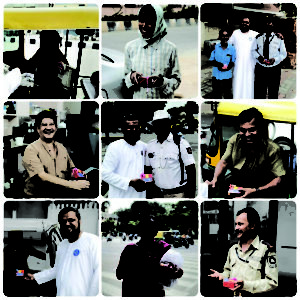