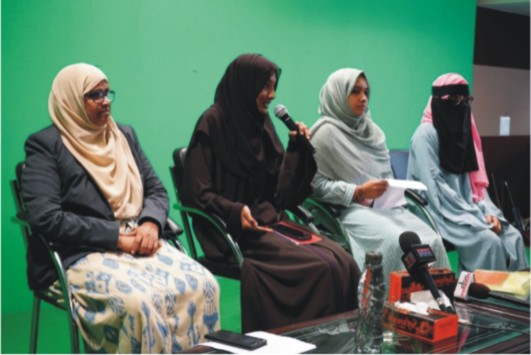 The first National President and General Secretary of the Girls Islamic Organization (GIO), one of the leading women’s organizations in India, was chosen on July 30. The National Federation of GIO’s first president is advocate Sumaiya Roshan from Karnataka, and its general secretary is Samar Ali from Kerala.

A notable change occurred when GIO, which had previously operated at the state council level, consolidated and became a National Federation. The new body will have a Federal Committee with members from every GIO state for a two-year term, and it will be led by a National President and General Secretary. The Federal Committee meeting took place from July 29 to July 31.

GIO is the Jamaat-e-Islami Hind’s girls’ wing and has been operating since 1984. Prior to this, the women’s wing of the JIH served as the GIO’s state council president and secretary. It has been actively involved in addressing a variety of issues affecting women generally and Muslim women in particular across the country. Almost all of India’s states are represented in the organisation. GIO has been working on the general development of Muslim women for the past few years and will keep doing so at the state level. The goals of the Federation at the national level will be to coordinate interaction and idea sharing between the states and to address and give voice to important national concerns.

It strives to give women a place to connect, express themselves, and refuel while empowering them to face societal concerns. Its focus will be on the aforementioned goals, not just Muslim issues but also general women’s issues and matters of national significance.

Every person in the country must be given equal opportunity to develop as individuals and reach their full potential because they are a part of the largest democracy in the world, Sumaiya Roshan said. Despite significant progress and attempts, discrimination against women still exists in India, she rued.

The Mandal Commission’s recommendations were made forty years ago, but there is still a glaring disparity in the chances offered to Other Backward Communities (OBC). The organization’s main goals are to promote socio-political progression, entrepreneurship development, and equal access for women from underrepresented groups. The organization will make deliberate attempts to provide a free and open forum where everyone may speak out and protest the injustices they are subjected to, Samar Ali said.