Thousands of Muslim women gathered to enroll in self-help
groups only to get abandoned by the district officials. 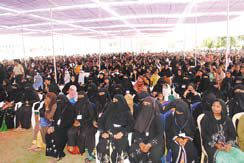 Nearly 10,000 Muslim women aspiring  to become economically empowered gathered on 16th August in Sarvodaya college ground in Nellore town of Nellore district, but only to be ignored and abandoned by the district officials. Haji Abdul Aziz charitable trust (HAAC trust) was the organiser of this huge congregation of Muslim  women, to help them form their own self-help groups and get them registered into it. Nearly 370 self-help groups were formed consisting of many Muslim women from different economic strata.
Organisers of the meeting claimed that permission for the meeting and the venue was provided by the collector P. Sridhar, but he failed to turn up to address poor Muslim women which could have given a lot of moral support to the underprivileged. HAAC trust alleged that the Congress party leadership in Nellore district had influenced the collector, minority’s corporation director and local district officials and stopped them from attending the program which was meant for poor Muslim women and their economic empowerment, through their own united effort.

Aariz Mohammed, head of Center for Minorities’ Empowerment was the chief guest for the program. He said schemes which are articulated with the sole aim of empowerment of the Muslim women are not reaching the real stake holders at the ground level. Haji Abdul Aziz, HAAC trust founder said these self help groups are non-profit ventures without any personal interest. Though thousands of
Muslim women got enrolled into self-help groups and completed the purpose for the meeting, nonetheless they contacted on 080-25479968 or Sajida Begum can be accessed on 8050907706. n registered strong protests in the venue against the absence of government officials. Speakers pacified Muslim women by assuring them, that they will register a complaint with Sonia Gandhi and UPA core committee on the action of the government officials.