India was declared a Water Stressed country in 2014. India has 4% of the world’s freshwater and should have been a Water Adequate nation. But increasing population and ecological degradation is destroying the water resources of the country. Some of the factors responsible for this situation are listed below: 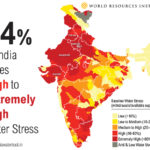 54% of India faces from High to Extremely High Water Stress, according to the World Resources Institute.

Industrial waste
90% of wastewater discharged in rivers after treatment i.e., 38,254 million litres, does not meet environment norms. The sewage water should be treated so that it is fit for at least bathing. World Bank estimates that the current industrial water use in India is about 13 per cent of the total freshwater withdrawal in the country and the water demand for industrial uses and energy production will grow at a rate of 4.2 per cent annually.
Pollution
75% of available water resources in the country do not meet the World Health Organization (WHO) water quality standards because of pollution caused by rapid industrialisation, urbanisation, poor farming and irrigation practices

Urbanisation
70% of India’s water pollution happens due to waste from cities that house only 32 per cent of India’s population, says a report of the Central Pollution Control Board. Owing to poor infrastructure, cities are able to treat only 31 per cent of the waste, while the remaining is dumped untreated. The report also points out that only 38 per cent of the population in the cities have access to sanitation and 78 per cent to clean drinking water.

Rainfall Runoff
65% rainwater runoff goes into the sea, which is a major wastage considering that over 70 per cent of country’s farming is rain-fed. The runoff also causes soil erosion, river flooding and siltation of water bodies
Poor Sanitation
6.4% of India’s gross domestic product (Rs. 328,500 crore from 2014 figures) worth of economic opportunities were lost in 2006 because of poor sanitation. Poor sanitation results in water contamination that leads to widespread diseases and wastage of public resources.
Depleting Groundwater
210 billion cubic metres is the amount of groundwater extracted in India annually, which is the highest in the world. Groundwater today provides for more than 60 per cent of net irrigated area. As a result, over 60 per cent of districts in the country are facing problems relating to poor quality and shortage of groundwater, says the mid-term appraisal of the 11th Five Year Plan
(Source: Planning Commission, Bhartiya Agro Industries Foundation, Central Pollution Control Board)