Bestowed with immense courage and determination, people with special abilities have made their mark in various ways, and it is they who really deserve the “Lifetime Achievement Awards!” Their success stories, as narrated by them at the India Inclusion Summit 2015, held at Bangalore recently, holds lessons for everybody, to accept life as God’s Gift! 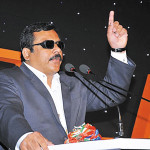 With the winter chill in Bangalore during November came a glow of warmth in the form of the India Inclusion Summit 2015. This year, it seemed like as if even nature had surrendered to the summit’s positive vibrations. It had been a very rainy, cloudy week in the city, but on November 21 the clouds cleared and the sun was peeping out happily!
The India Inclusion Summit-Open Day is one event that I look forward to eagerly each year. I know that every time, the event helps me learn very positive lessons about life, as it does to everyone who is part of it.
The Inclusive India Dream was the dream of a few individuals, led by V.R.. Ferose and his friends. Today it has become a world-class platform to spread awareness about ‘disability’ through popular media on the need for inclusion. It also aims to identify the roles which organizations can play to include persons with ‘disabilities’ and to thereby promote greater inclusivity. To share innovations and success stories in the field of ‘disabilities’ and inclusion. To support projects that lead to education, employment and livelihoods for people with ‘disabilities’.
The India Inclusion Summit 2015 brought together courageous individuals from all over India who spoke about how they are living life in full zest despite their disabilities.
Candles drive away darkness and spread light around us. Bhavesh Bhatia lost his eyesight in 2003, but he did not dwell in darkness. Instead, he bravely took a rehabilitation course for visually-impaired people, learning things like incense- and candle-making. Since then, this visually-challenged entrepreneur has been bringing light into other people’s lives. He founded ‘Sunrise Candle Industries’, based in Maharashtra, which makes and distributes over 9000 different types of candles, employing over 200 people, many of them visually impaired or disabled. Bhavesh is a great orator with a flair to spice up his speeches with poetry!

First paraplegic Indian woman biker
Awarded the Arjuna award, the highest honour for a sportsperson in the country, for her achievements, Deepa Malik, has very beautifully and gracefully put paralysis out of her way to make a mark for herself. She was left paralysed from chest down during a procedure to remove a spinal tumour. Yet, she took to sports at the age of 36, braving three surgeries over the past 14 years. She is the first paraplegic Indian woman biker, swimmer, rally driver, entrepreneur and a motivational speaker, all in one!
How many tigers are there in India today? Sure you don’t know! But Hans Dalal knows and also has seen a tiger in the wild in 2007! Cerebral palsy has not stopped him from venturing into the jungles and scaling numerous mountains. He has spent the last few years travelling extensively through India’s forests, studying wildlife, animal behaviour and tracking big cats.
Mohammed Asif Iqbal lost his eyesight at the age of 16 years. The first blind commerce graduate from St Xavier’s College, Kolkata, Asif has played a key role in creating reservation quota for the ‘disabled’ across IIMs, IITs and all governmental universities in India.
Medical literature stated that he would live the life of a wooden doll, but Nipun Malhotra proved it wrong. An alumnus of St. Stephen’s College and the Delhi School of Economics, Nipun was born with Arthrogryposis, a rare disorder leading to lack of muscles in the arms and legs. Commuting on a wheel chair, Nipun is now the CEO of the Nipman Foundation, which works in the area of health, dignity and happiness for persons with disabilities.
I remember Prahlad Kakkar as an advertising guru, and I was glad to listen to him speaking at the Summit about his creative pursuits and how he could never understand mathematics (just as I couldn’t!) As a dyslexic, Kakkar found joy weaving stories in his mind while his teacher rattled off maths formulas! I completely agree with him when he says that we would rather call people with ‘disabilities’ as “people with special abilities.”
Deccan Herald, Bangalore is lucky to have L. Subramani working with them as a journalist. Author of “Lights Out” the story of a man’s descent into blindness, Subramani is visually impaired and has set up his website which talks about gradual vision loss, life with ‘disabilities’ and limitations we all face as human beings.
Life on a Wheel Chair

Deepa Narasimhan has been instrumental in launching of the Disability Empowerment Resource Group, a partner of KickStart, and Wheels of Change, an accessible cab service in Bangalore. Playing the host and compere for the first half of the Summit, Deepa was born with spinal muscular atrophy. She gets along well with life on a wheelchair and has an ever-smiling disposition.
The next time Flipkart delivers something you have ordered on time as always, remember to thank people like Sumanth K.V. He works with Flipkart in the last mile operations team. Born with cerebral palsy, Sumanth went on to do his MBA from the Indian Institute of Management, Indore!
Heard of Vinod Thakur Dance Academy in Delhi? It is set up by Vinod Thakur, a youngster who has no legs, but has mastered many tricky dance moves!
It was heartening to see enthusiastic young innovators at the Summit, like Anirudh, who started the Lechal shoe project, bringing electronic shoes for the visually impaired , and Kalyani Khona, who is working on a app catering to the matchmaking and social needs of people with ‘disabilities’. Patu Keswani, chairman and managing director of the Lemon Tree Hotel Company, was there, too. He focuses on offering employment opportunities to people with ‘disabilities’ in his Lemon Tree Hotels. Another person who addressed the Summit was Uma Tuli, whose motherly warmth is evident through the Amar Jyoti Charitable Trust in Delhi she has set up. The schools run by the trust in Delhi and Gwalior have children with and without disability studying together.
Only Positive Stories
Dhimant Parekh, who, along with his wife Anuradha Kedia, runs The Better India web portal (www.thebetterindia.com),
presented some very positive, touching success stories of people with special abilities. Its feels good to begin your day reading their web portal as it will bring a smile on your face!
Yes truly folks, we need to say “wow’ and not “Oh”, seeing these wonderful people who have welcomed life, treating it as precious, and who have made best use of their time and abilities . They are a source of inspiration to everybody, and one can learn so much from them about life.
Its these brave people who deserve the “Lifetime Achievement Award” I would say. And the “Most Positive Event of the Year Award” should most certainly go to the India Inclusion Summit 2015!
(To know more about the India Inclusion Summit, take a peek at www.indiainclusionsummit.com)