Civil wars, conflict and persecution are the major cause of people being displaced. 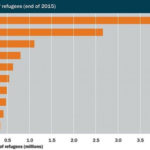 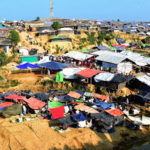 Islamic countries continue to be top generators of refugees around the world. The annual UNHCR report released recently says there are 68.6 million displaced people in the world, i.e., more than the population of the United Kingdom. Of these, 22.5 million are refugees, 40.3 million are displaced in their own country and 2.8 million are seeking asylum.
Of the total displaced persons, 5.5 million are from Syria, 2.5 million are from Afghanistan, 1.4 million come from South Sudan (a country that came into existence only five years ago) and 1.2 million from Myanmar. Curiously, it is the Muslim countries who bear a major burden of these displaced people. Turkey is hosting 2.9 million (mainly from Syria); Pakistan has 1.4 million, Lebanon one million, Iran 979,400 and Bangladesh 932,000. Among non-Muslim countries, Uganda has 940,000 refugees and Ethiopia hosts 791,600. An additonal 6.3 million Syrians are internally displaced, the Report informs.
The Report says 44,400 people are forced to flee their homes everyday due to conflict and persecution.  There are also an estimated 10 million stateless people who have been denied a nationality and access to basic rights such as education, healthcare, employment and freedom of movement.
An estimated 16.2 million people were newly displaced in 2017. This included 11.8 million individuals displaced within the borders of their own countries and 4.4 million newly displaced refugees and new asylum-seekers.
Lebanon continued to host the largest number of refugees relative to its national population, where 1 in 6 people was a refugee under the responsibility of UNHCR. Jordan (1 in 14) and Turkey (1 in 23) ranked second and third respectively. When Palestine refugees under UNRWA’s mandate are included, the figures rise to 1 in 4 for Lebanon and 1 in 3 for Jordan.
Developing regions hosted 85 per cent of the world’s refugees under UNHCR’s mandate”about 16.9 million people. The least developed countries provided asylum to a growing proportion, amounting to one-third of the global total (6.7 million refugees). Altogether, more than two-thirds of all refugees worldwide came from just five countries.  Turkey hosted the largest number of refugees, with 3.5 million people.
Children below 18 years of age constituted about half of the refugee population in 2017, up from 41 per cent in 2009.  The levels of new displacements in 2017 continued to far outstrip any returns or other solutions. During the year, 16.2 million people were newly displaced, including 4.4 million who sought protection abroad and 11.8 million who were forced to flee but remained in their own countries. At the same time, many others returned to their countries or areas of origin to try to rebuild their lives, including 4.2 million internally displaced people (IDPs) and at least 667,400 refugees.  Still, these returns continued to represent only a small fraction of the refugee population (3 per cent).
As in previous years, the Syrian Arab Republic (Syria) continued to account for the largest forcibly displaced population globally. As of the end of 2017, there were 12.6 million forcibly displaced Syrians, comprising around 6.3 million refugees, 146,700 asylum-seekers, and 6.2 million IDPs. Some 4.8 million Afghans remained forcibly displaced, of whom 1.8 million were IDPs and 3.0 million were refugees or asylum-seekers.
The flight of refugees from Myanmar to Bangladesh occurred at a particularly rapid rate. Over 2017, 655,500 arrived in Bangladesh, mainly concentrated in 100 days from the end of August, making the humanitarian response very challenging. In addition, there was a large proportion of infants, children, and pregnant women among refugees, adding a further layer of complexity for interventions.
Movements of people across the Mediterranean decreased compared with 2016. Numbers significantly declined for the Eastern Mediterranean crossing beginning in April 2016 and for the Central Mediterranean since July 2017. Nonetheless, many people continued to risk their lives traversing this sea, with the majority arriving in Italy, where some 126,500 new asylum-seekers submitted applications in 2017.
“Nowhere is the link between statelessness and displacement more evident than for the Rohingya community of Myanmar, for whom denial of citizenship is a key aspect of the entrenched discrimination and exclusion that have shaped their plight for decades.”
(Filippo Grandi United Nations High Commissioner for Refugees October 2017)