The OIC summit stressed upon the need for the Muslim world to enhance its outreach and interaction with other religions and cultures through constructive dialogue, mutual understanding and moderation. 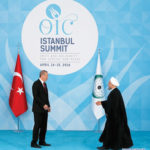 Istanbul: The Organization of Islamic Cooperation (OIC), a pan-Islamic summit, bringing together leaders from across the Muslim world, concluded in the Turkish city of Istanbul recently with a pledge to combat terrorism, cast aside sectarian differences and address regional conflicts. Chairing the final session of the summit, Turkish President Recep Tayyip Erdogan said that sectarianism, racism and terrorism are the three largest challenges confronting the Muslim world. “As Muslims, we cannot overcome our difficulties without achieving unity in spite of our differences”, he said.
The conference expressed concern over the rising tide of xenophobia, Islamophobia and anti-Muslim racism in Western countries. The leaders emphasized their shared commitment to defend human dignity by working towards alleviating poverty, addressing social injustices and creating equal opportunities for Muslim minorities. The summit recognized the need for the Muslim world to enhance its outreach and interaction with other religions and cultures through constructive dialogue, mutual understanding and moderation. The OIC condemned terrorism and sectarianism in all their forms and manifestations regardless of motive and wherever and by whomever committed. It renewed unwavering commitment to strengthening cooperation between the OIC and other international organizations to prevent and combat the scourge of terror. The summit also emphasized the importance of fostering tolerance, respect, dialogue and cooperation among different cultures, civilizations and peoples, besides reiterating that intercultural dialogue, mutual respect and finding common grounds for solidarity are the only means to build peaceful, prosperous and socially cohesive communities.