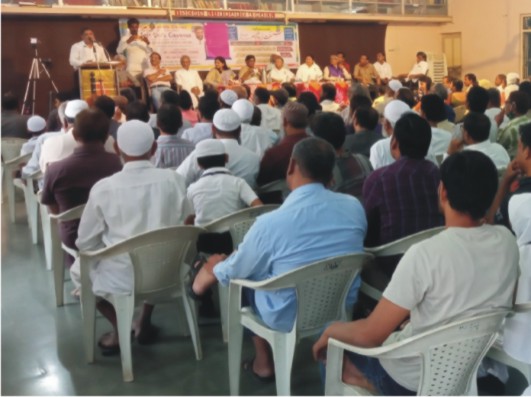 Malegaon: “There is no age for learning as Hafiz Jalaluddin Qasmi has built his grip on this language after working hard for five years on a difficult language like Sanskrit,” said Sanskrit scholar Pandit Kishore PrashurRam Limaye in his presidential address during the launch of “Sanskrit Urdu Grammar at a function here. It is the first Urdu book on Sanskrit grammar. For people who know Urdu, Limaye continued, such a magnificent and vital work has come to light which is “unimaginable.”

Regardless of this book is listed or not listed in the Guinness Book of World Records, it will undoubtedly leave an indelible impression on Indians. Someone has chosen to do nice things that will significantly help the people of the planet. I want to express my heartfelt gratitude to the author of this book for his outstanding work, said Mohammad Raza. Reading this book will not only familiarise us with the Sanskrit language but also with our Urdu language to a large extent, he added.

Malegaon’s prestige and status in the worlds of literature and science have risen due to the release of this book, according to journalist Imtiaz Khalil. Despite the difficulties, Qasmi was able to fulfill this mission. Of course, it will be recorded in the Guinness Book of World Records, and this work will be admired by people worldwide.

Prof. Khairnar also appreciated the book’s author and regarded this work as magnificent and noble.

The author, Hafiz Jalaluddin Qasmi, introduced the book. “Languages meet civilizations,” he said, explaining why the book was written. “I hope that this endeavour will help the two major communities of India to come closer together.”