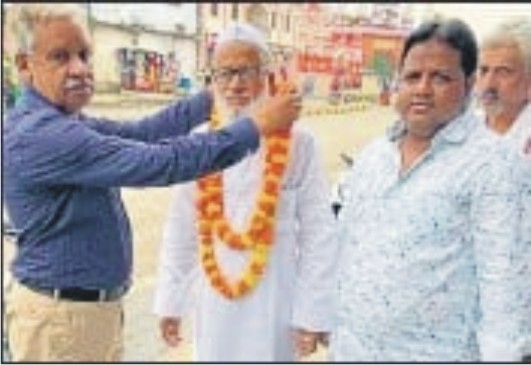 Lucknow: Choudhary Kaif-ul- Wara, on September 14, took charge as the 19th chairman of Uttar Pradesh Urdu Academy established in 1972. On his arrival at the Academy, Secretary Zuhair bin Saghir (IAS) welcomed him with a bouquet. A reception was also organized in his honour on this occasion. Academy members Dr. Rizwana and Ms. Mahe Talat Siddiqui accompanied the Chairman. Mohammad Iftekhar, a member of the State Haj Committee, was also present.

In the welcome address, he expressed gratitude to Chief Minister Yogi Adityanath for nominating on this post. He assured to work towards developing Urdu language and expansion and modernization of Urdu Academy’s plans. He also confirmed that appointments would be made as per rules on the vacant posts for a long time in the Academy. Akademi secretary Zuhair bin Saghir (IAS) also assured that the Chairman would get full cooperation of all the employees of the Academy and all the people will work hard for the progress of UP Urdu Academy.

Mohsin Khan, who conducted the proceedings, highlighted the schemes run by the Academy. He also introduced the staff to the new Chairman.

The Government of Uttar Pradesh established the Academy to promotethe Urdu language in January 1972. It was established for the development and enrichment of the Urdu Language and Literature. The Akademi works for the benefit of the Urdu knowing public through its schemes.Such as giving scholarships to students from class VI to the Ph.D. level; to reprint the classical books of merit in Urdu; to provide financial aid to the old and the needy Urdu poets, writers, journalists, and calligraphers; to hold seminars and symposia on the current topics concerning the promotion of Urdu language and its literature.