Over 10,000 participants from 80 nations and 50 faiths, gathered in Salt Lake City for the Parliament of World Religions, 2015, covering issues, from ending war, to countering extremism with acts of compassion. 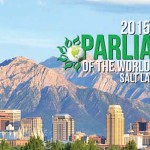 Thousands of people from around the world gathered at the Salt Palace Convention Center in Salt Lake City, Utah last month, for the opening ceremonies of the Parliament of the World’s Religions.
“Welcome, welcome, welcome,” said Imam Abdul Malik Mujahid, Chair of the Board of Trustees of the Parliament of the World’s Religions to thunderous applause from the audience.
“With the permission of the great indigenous people of this land, with love in my heart and compassion in my mind and with smiles on our faces to reclaim the heart of our humanity, I declare the sixth Parliament of the World’s Religions open.”
The inspirational evening of prayers and reflections from faith leaders and dignitaries began with a Grand Procession led by the indigenous nations of Utah and the Grand Basin to the pulsating beat of a tribal drum circle.
“This is our time, the world is coming closer in the global village. Let’s bring hearts and minds together and closer. That is the interfaith movement. Our actions speak louder even if the media has difficulty hearing them.”
“Just last week, hate-mongers demonstrated in 20 cities across America against the Muslim community, “ he added. “Who outnumbered them? People of faith, people of love, people of interfaith.” “That is interfaith. The Parliament has been ahead of its time, always inclusive, always encouraging the understanding of the other, always humanizing the other, always welcoming the other.” Imam Mujahid also noted that there were only few female speakers at the first Parliament in Chicago in 1893.
“In this Parliament, the majority of speakers are women speakers,” he said to loud applause from the audience.
Ten thousand people from over 80 countries and 50 different religious and spiritual traditions gathered in Salt Lake City for the Parliament, making it the world’s largest inter-religious gathering.
The convention themed, “Reclaiming the Heart of Our Humanity,” was filled with programs and conversations on climate change and creation care, war, violence and hate speech, and economic inequality and wasteful living.
The Governor of Utah, Gary Herbert, welcomed the delegates to the city and state during his address in the opening plenary session.
“I thank you all for being here,” said Governor Herbert. “As Governor of the great state of Utah, it is my pleasure to welcome you and the Parliament of the World’s Religions – we’re honored to have you here.”
“I see this as an example of what the world can do in coming together in peace and harmony,” added the Governor. “I appreciate the work of people of Faith in trying to make the world a better place; I appreciate the vision of the Parliament of the World’s Religions.”

Restore World Kindness: Makkah Imam
“Kindness is everything,” said Shaikh Abdullah Humaid in his sermon. The Imam of the Grand Mosque of Makkah, Dr. Shaikh Salih Abdullah Humaid, called upon worshipers attending the Friday congregational prayers services held at the Parliament of the World’s Religions in Salt Lake City, Utah, to incorporate kindness and ease in all matters.
“Our Prophet Muhammad, (Pbuh) states, ‘Whenever good manners enter anything, it will beautify it and whenever it is removed from something, it will be made worse,’ “ the Imam reminded worshipers. “It is kindness. It is controlling one’s desires with patience and disciplining them away from violence.”

Special Activities and Events
Many special activities and events took place in and around the Salt Palace Convention Centre. An exhibit hall featured booths offering spiritual texts, original artwork, handcrafted jewelry and unique clothing items from around the world for purchase. Twelve faith spaces were set up in the convention center to provide attendees with an opportunity to meet and speak with people of different religious traditions. A shared central area between the rooms provides an interfaith space for conversations and connections.
At the “Faith in Women” session, a major declaration was issued related to religious and spiritual sources of inspiration and empowerment for women, the transformative impact of women on their religious traditions, and the unique contribution of women to meeting global challenges.
Primatologist and anthropologist, Jane Goodall spoke to attendees about uniting religious and spiritual communities to save the environment. More than 70 other speakers, including three Nobel Peace Laureates, covered issues from ending war to countering extremism with acts of compassion.
Nearly 1,000 volunteers worked behind the scenes as attendees put their faiths’ activities on display. Buddhist monks worked on an intricate sand painting, as Sikhs served up to 7,000 meals at a time from their local langar “ a community kitchen that feeds people of all faiths free of charge.
On the final day of the Parliament, the sand painting was brushed away to demonstrate the impermanence of this world and the Sikh langar donated thousands of pounds of unused food to a Catholic charity that feeds the poor in Utah.
The Parliament is the oldest and most diverse interfaith gathering in the world, dating back to its first meeting in Chicago, Illinois on September, 11 1893. Since 1999, it has gathered people of faith together every five years.
The board of trustees announced during the gathering that the Parliament would meet every two years now, instead of five.
Chairman Imam Abdul Malik Mujahid closed this year’s session saying that participants had been telling him all week, “This was the best Parliament ever.”