A recent survey, titled “Freedom of the World 2013,” reveals that none of the Muslim countries topped the list of granting rights and civil liberties to its citizens. 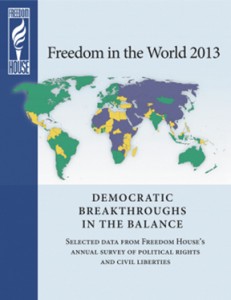 Islam professes freedom and human rights for its citizens, but ironically it is the Muslim countries that have been lagging behind in providing its citizens the basic freedom and liberties. According to a recent survey, titled “Freedom of the World 2013″, published by the Freedom House, an NGO based in America and an independent watchdog organization dedicated to the expansion of freedom around the world, the Muslim countries have disappointed those who boast of the human principles of Islam.
Though the report also shows that there has been a decline in the overall freedom in the world due to the political, religious and social crises, it prominently comes out in the report that the Muslim majority countries have fared badly in terms of political and civil liberties to their citizens.
The survey has divided all the countries under three heads “ free, partly free and not free. The report says, “A Free country is one where there is broad scope for open political competition, a climate of respect for civil liberties, significant independent civic life, and independent media.
Partly Free countries are characterized by some restrictions on political rights and civil liberties, often in a context of corruption, weak rule of law, ethnic strife, or civil war.
A Not Free country is one where basic political rights are absent, and basic civil liberties are widely and systematically denied.”
It has rated the countries on the basis of most free to the least free where 1 represents the most free while 7 represents the least free.
Out of 197 countries and 12 “disputed” territories like the two Kashmirs and Gaza strip, most of the Muslim majority countries have fared badly winning 7 out of 7 in both categories of Political Rights and Civil Liberties.
A majority of Muslim countries do not even have electoral democracy. Thus most of the countries have got the worst marks, that is, 7 while the better ones have got 5 or 6. For example, Afghanistan, Algeria, Iran, Iraq, Azerbaijan, Bahrain, Brunei, Chad, Egypt, Kuwait, Kazakhstan, Jordan, Libya, UAE, Kyrgyzstan, Tajikistan, Maldives and Mali. Oman, Qatar, Yemen and Turkmenistan have got points from 5 to 7. It speaks of the lack of freedom and liberties in these countries.
Worse, out of 47 countries, 9 have been designated as Not Free, and these are Muslim majority countries or monarchies. The countries are Eritrea, Equatorial Guinea, Saudi Arabia, Somalia, Sudan, Syria, Turkmenistan, and Uzbekistan. Only Muslim countries that have scored 3 or below 3 is Indonesia that has scored 2 for political rights and 3 for civil liberties. The other Muslim country that has demonstrated a better score is Bangladesh with 3 for political rights and 4 for civil liberties. Bosnia Herzegovina has scored 3-3 under both the categories.
The majority of the Muslim countries with low marks that is highest in political insecurity and violation of human rights are those that are going through civil and political strife like Pakistan where terrorism, political instability and Muslim-on-Muslim violence have earned it 4 and 5 for political rights and civil liberties respectively. Similar is the case of Afghanistan, Bahrain, Libya, Tunisia, Egypt and Iraq that are going through political and sectarian strife. Iran also fares badly on freedom and liberties index as it has been cracking down on journalists, writers, artists, bloggers and political opponents. The number of death sentences was the highest during the year as political opponents were sentenced to death.
Another country which is grappling against the dictatorship is Bahrain, a Muslim majority country. It was rated 6 on both counts. The political opponents as well as democracy and rights activists have been at the receiving end of the dictatorship and freedom and liberty is at its worst in this country.
Turkey had though improved during the early years of Erdogan’s tenure, of late it has seen deterioration on the rights front as it leads in the incarceration of journalists and advocates of democracy. Thus though it has got 3 for political rights, it has earned a 4 for civil liberties. It has shown in a negative change that is a decline in an overall situation of rights and liberties.
Most of these countries with poor track record have 60 to 98 percent Muslim population. These countries have not only demonstrated intolerance towards the minorities, but have also shown intolerance on the basis of ethnicity or linguistic prejudice.
Pakistan, Iraq, Egypt, Iran and Saudi Arabia are powerful Muslim countries but have disappointed the world with their treatment of their citizens. Recent developments in Maldives and Mali have only strengthened the belief that Muslims are not satisfied with any system. When under dictatorship or monarchy, they fight or rebel against the dictatorship, but when they achieve democracy like in Egypt, they begin their struggle for the establishment of a democracy governed by the Shariah. And then persecution of minorities starts because of the wrong interpretations of Islam by the narrow-minded scholars who are ignorant of the essence of the teachings of Islam.
Muslims the world over, lay undue stress on the external form of the government and not on the inner soul of it where the delivery of justice and good governance matters. In the past, there existed a few monarchs whose reign was more democratic than some of the best democracies of the modern world.
It is very unfortunate that none of the Muslim dominated governments scored a 1 in the survey. The United States of America, the United Kingdom, Germany, France, Ireland, Norway, New Zealand, Netherlands etc have got 1 both in political rights and civil liberties. They are all Christian countries with a sizeable minority population of Muslims and followers of other religions.
(newageislam.com.)