HomeNational News and AffairsHeritage and Environment

Islamic Voice 0 November, 2012 12:00 am
The Massive Mosque in Africa That’s Built Once a Year
Greener Earth in Support of ‘One Tree by One Person’
This Muslim Astronomer Calculated the Length of the Solar Year Long Before the Use of Telescopes! 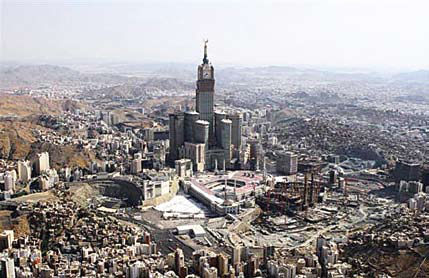 The current Central Area surrounding the Haram Mosque will be expanded 10-fold to accommodate more Haj and Umrah pilgrims and
visitors, announced Dr. Sami Barhameen, secretary general of the Makkah Development Commission. The Makkah train project will be implemented before the end of the next Hijri year 1434 (2013), he said. The train will serve pilgrims and visitors who want to travel to and from Makkah and Madinah, he added. Three train stations will be built in different locations near the Grand Mosque, including one behind King Abdul Aziz Waqf, one at Jabal Omar, and another in the Ghazza neighborhood. Work is also on another project, the high-speed Haramain Railway which will link the holy cities of Makkah and Madinah to the Red Sea port of Jeddah, an entry point for
millions of pilgrims, to relieve road congestion. The current expansion will another 400,000 square metres area to the Haram  Mosque. It will allow the mosque to take  another two million pilgrims during the holy month of Ramazan when the largest congregations are held. Dr. Barhameen responded to accusations that the commission had been slow in implementing Makkah projects compared to those in the holy sites. He said Makkah has its own unique topographical features. He added the expropriation of buildings to make way for new projects takes a lot of time and can only happen at certain times because “we don’t want to bother or annoy Umrah performers, visitors and the people of Makkah.” He said with regard to the projects implemented in the ritual sites like Mina and Arafat, these were carried out faster because the ritual sites only receive pilgrims for one month every year, making it easier to implement more projects within a short time.