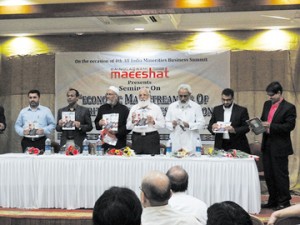 The 4th All India Minority Business Summit, “Economic Mainstreaming of Minorities: Strategies and Actions”, was held in Mumbai last month. The summit brought together entrepreneurs from the minority communities to discuss the strategies and actions for bringing the minorities into the mainstream of the society. The summit was organised at Islam Gymkhana, Marine Lines by Bainulaqwami Maeeshat, an International business magazine. Chief Guest Mufti, A.K Barkatulla, Shariah Advisor of Islamic Bank of Britain, UK said that Muslim entrepreneurs have money and business ideas, but still they could not progress due to lack of education. Dr Shariq Nisar, (Director, TASIS), delivered the inaugural speech, stressing the need to have inter-community business relations. According to Mufti A.K Baraktullah, Muslim entrepreneurs are unaware of the corporate world and are unregistered businessmen in the eyes of the government. They fear to open bank accounts and to apply for Pan Card, as they believe that the Income Tax Department will raid their homes.
On the occasion, India’s first Urdu financial magazine “Maeeshat” was also released. Abdul Hamid Abdul Majid Nathani (Managing Director, Nathani Group of Companies) was awarded the Entrepreneur Excellence Award 2012.
( Twocircles.net)