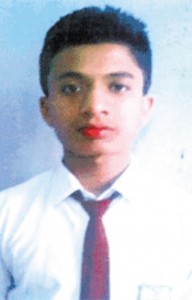 A Muslim boy from Manipur has created history by topping the High School Leaving Certificate (HSLC) Examination 2013, conducted by Nagaland Board of School Education. Md. Helaluddin Shah, secured 96.16%, total of 577, marks out of 600. He is student of M.G.M. Higher Secondary School, Dimapur. Md. Helaluddin Shah is the son of Md. Islauddin Shah and Sanarembi, a resident of Borayangbi, in Bishenpur District. His father works as a teacher in a private school, while his mother is a house-wife. He is the fourth among five children. Helaluddin wants to go to Delhi to pursue higher studies. He aspires to join Indian Institute of Technology (IIT) after completing Std. XII. Md. Helaluddin Shah hopes to become an IAS officer and serve the nation. He said that Nagaland has better academic atmosphere compared to Manipur as there are fewer bandhs and blockades. School syllabus is covered in time in Nagaland.