Yasin Pathan started his drive in the 1970s with an aim to protect the 18th century temples in West Bengal’s Pathra village. 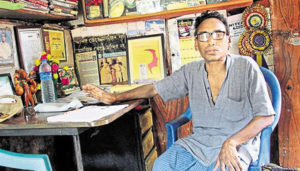 A 66-year-old Muslim is championing the cause of communal harmony by leading a movement to preserve temples. Retired school peon, Yasin Pathan started the ‘Save the Temples’ initiative in the 1970s with an aim to protect the 18th century Shiva and Vishnu temples in West Bengal’s Pathra village.
“The temples form a part of our heritage, and I am just doing my small bit to protect them for the next generation,” Pathan says. There are 34 temples in Pathra, and Pathan’s campaign has resulted in 18 of them getting restored by the Archaeological Survey of India.