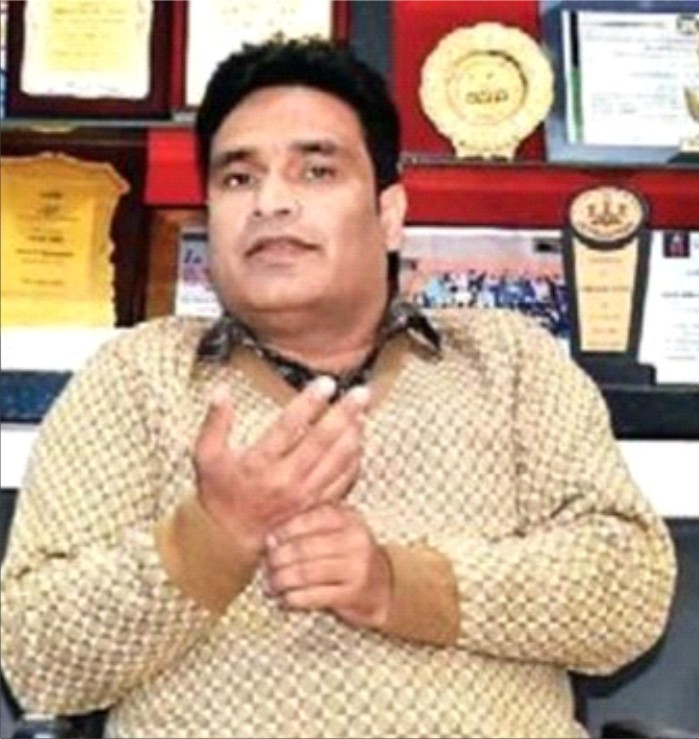 Though Javed Ahmad Tak was confined to the bed for years after getting injured in a militant attack, he is now teaching hundreds of disabled kids to tackle life’s challenges.

Jammu & Kashmir: Javed Ahmad Tak’s life took a dramatic turn in 1997. Hit by a bullet during a militant attack, he was confined to the bed for years first and now to a wheelchair. But Tak, now (45), has taken his disability head-on and has created opportunities for others like him. Today, he is a role model for many differently- abled people.
On the night of March 21-22, 1997, 21-year-old Tak was injured in firing at his uncle’s house at Bijbehara in Anantnag. “The gunmen had come to attack my cousin who was the block president of the National Conference. I tried to save his life and suffered a bullet injury,” recalls Tak. The bullet caused severe damage to his spinal cord, kidney, pancreas and intestines.
Tak, a BSc final year student at that time, remained hospitalized for about an year. After being discharged in February 1998, he remained bedridden for the next three years. “While being confined to bed, I would hear noises of young boys playing outside my home. In June 2000, I told my mother that I don’t want to sit idle and want to teach these young boys for free,” Tak said.
“I taught 80-90 boys for the next four years. After free coaching, I also started a book bank at my home to help boys and girls from poor families,” says Tak. He also started a uniform and school bag bank for those who could not afford them.
Wheelchair-bound, Tak was not content and wanted to do something for the specially- abled children. He asked his friends and relatives to find out disabled children in his locality and adjoining areas. In 2006, Tak started the Zeba Apa Institute for Specially-abled children.
He also continued his studies and completed his Masters in Social Work from the University of Kashmir in 2007. “Some of the children had mental disorders and their plight was miserable. A few of them were blind and some were hearing-disabled,” Tak said. The government had sanctioned Rs 75,000 ex-gratia to him in 1999 even though he had spent lakhs on his treatment.
“I took the money which helped me to start the school in rented accommodation. I hired a few trained teachers to teach disabled children,” Tak said.
The school was meant for primary students but later it extended up to 8th standard. About 120 differently-abled students currently study in the school which has 25 staff members, including 10 trained teachers.
The teachers use a variety of methods to teach different types of disabled students. Tak also has a teacher from Kerala, who is a special educator and speech therapist. “He helps us frame syllabus for different kinds of disabled children. He also trains the teachers,” he said.
The school does not have any fixed fee system and it is for parents to decide how much they can afford. “Some parents pay normal charges, some meagre and some don’t pay at all,” Tak says. With no help from the government, tahe school runs on donations from the public, NGOs and civil society groups. The school now has its building. “We constructed the building with the financial support of locals and NGOs,” Tak said.
The school has a good academic record. One of the visually impaired girl students, Zakiya Manzoor, is doing her BA from Delhi University. Another visually impaired Saima Hussain is a junior artist at J&K Cultural Academy. The students have also excelled in sports. They are also being trained in extra-curricular activities. Some have participated in national- level sports competitions and won medals.
Tak says if he had a better transport facility, the school would have over 200 students. The school has purchased two buses on loan for ferrying students, but that’s not enough. There are cases where parents
of children have hired accommodation near the school.
Tak hopes to expand the school to the higher secondary level so that it can cater to all disabled children of the four districts in south Kashmir. “I also plan to set up a hostel for students so that those living in far-off places can live here and avail of education facilities.”