Participatory Meet on Minority Issues – ‘No Progress on Housing and Health’

Islamic Voice 0 January, 2018 12:00 am
Can India, a Hindu Nation, find a solution to the Hindu Muslim Conflict?
Fulbright Awards
Free Coaching for SSC/RRB by Peace Foundation

Participants cite irrelevance of Govt. Urdu Medium Schools and plead for turning them into English Medium ones; No slum cleared in five years; ‘Housing for All’ merely a dream 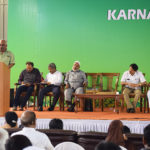 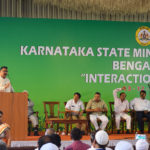 Bengaluru: A participatory meeting called by the Karnataka State Minority Commission on December 13 highlighted the concerns and issues pertaining to Muslims, Christians, Sikhs, Jains and Parsis in the State.
First of its kind, the meeting was though attended by several ministers belonging to the religious minorities, stood out for two distinct reasons: first State Health Minister Ramesh Kumar was present all through the deliberations from 11-30 am till 6-45 pm, and 2- participants from various parts of the state were given opportunity to express the grievances. Muslim ministers like Mr. Tanveer Sait, U. T. Khader, Roshan Baig and several leading lights of the Congress party in the State also took part in the discussions. Minister for Bengaluru Development and Town Planning also put up a brief appearance.
Chairman of the Commission Mr. Naseer Ahmed MLC made it plain at the outset that the meeting was not for leaders and legislators to speak but for delegates to air their views. He even denied that the meeting had anything to do with the approaching Assembly elections in the State. Referring to the recent communal disturbances in Honnavar and Sirsi, he pointed out that even while the post mortem report had made it clear that the death of a Hindu youth (whose body was found floating in a tank but bore no injuries) had nothing to do with communal conflict, the parivar outfits were communalizing the issue. Naseer informed the gathering that a sub-committee for dealing with issues of the minorities, especially security and law and order, had been formed under the Government which had its first meeting on November 9. He said the State has been celebrating the International Minority Day on December 18 for the last three years.
‘Housing for All’ on Paper only
In a powerpoint presentation on the situation of Muslims in the State, Mr. U. Nisar Ahmed, IPS retired, and former IG-DIG of the State, said there were 800 slums in the municipal limits of Bengaluru. Of these, 220 had Muslim concentration. Referring to the manifesto of the ruling Congress Party, he reminded that the Party had promised to provide houses for all but not one house was provided to the dwellers of 7,000 hutments in D. J. Halli in the city. “The Bruhat Bengaluru Mahanagar Palike had promised to turn Bengaluru into a slum-free city. But it has proved to be a mirage only. No slum has been cleared although the BBMP has already crossed the midpoint of its tenure. He said there were 414 huts cloistered in a less than an acre area in JJR Nagar on Mysore Road. He said the party had promised to set up special courts for providing relief to innocent people arrested on the charges of terrorism. But this remains unfulfilled.
Mohammed Iqbal of Federation of Karnataka Muslim Association (FKMA) said the pleas for inclusion into voters list was being rejected on the specious plea of there being no computers or other paraphernalia for the same. Father Arockiaswamy pleaded for empaneling all the minority NGOS with the Minority Commission for skill development programme. He complained that the Bidayee scheme was inaccessible for common people. Father Edward of Don Bosco Service Society said the schools set up by minorities were not being issued Minority Certificate. Mr. Farooq of Al-Aman Trust which runs Ashiyana Home for the Aged, stressed the need for more such homes and the rehabilitation centres for the handicapped and the disabled. He requested Government land for such worthy causes.

Homelessness amid Oversupply of Homes
Journalist Maqbool Ahmed Siraj said there were 1.75 lakh unoccupied flats and nearly eight lakh people living under subhuman conditions in slums in the State capital. He further said he was not pleading for handing over unused flats to the slum dwellers, but wants to highlight the priorities of the current governance where people having invested in flats keep it vacant in order to earn profits but lakhs of the poor people go without a roof over their heads. He wanted the unoccupied homes to be taxed more and these revenues be used to construct homes for the poor.

Recertification
He said there were 5,000 Govt Urdu schools in the State (these include lower primary, upper primary and high schools) but they were mainly serving the around 10,000 teachers to earn a livelihood while students were being given a stale fare in the name of education. He wanted a relook at the policy of Urdu medium as Urdu was neither relevant to the market nor to the administration. He urged recertification of Urdu medium teachers every three years in order to continually upgrade their capacity. He reminded the Minister that three years ago, plans were announced to develop three prime Wakf properties in the city into commercial complexes and asked why no action was being seen now. Mr. Siraj said Muslims need to introspect as at least 15,000 persons were performing Umrah from the city every year but there is illiteracy, poverty and homelessness among Muslims.
In his reply to the grievances aired and concerns expressed, Mr. Tanveer Sait, Minister for Primary and Secondary Education, Minority Affairs and Wakf said the Karnataka Government had allocated Rs. 2700 crore in the 2017-18 State Budget and the Government was in constant consultation with the targeted communities for constant improvement in their condition. He said the Government had an open mind and any scheme that is implementable will be considered for the amelioration of the conditions of religious minorities. He said 19,000 minority students had benefitted under Arivu (scholarships for students in professional courses) during the last five years of the Siddramaiah Government. He said he would look into the suggestion of recertifying the Government teachers’ skill. He pointed out that the Urdu medium schools were closing as around half of the State’s Muslims were living in urban areas where Muslim families find no relevance for Urdu medium education. He however clarified that the Government had no intention to abolish three language formula or close Urdu, Tamil or Telugu medium schools.