Parties and their Perceptions on Muslim Issues 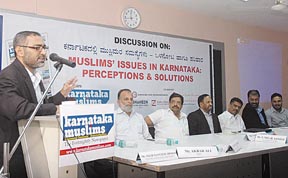 Bangalore: “Muslim Issues in Karnataka: Perceptions and Solutions,” a discussion organised by Karnataka Muslims here on March 23, 2013, brought together members of various political parties. Naseer Ahmed, MLC from the Congress, Gopinath Reddy, from BJP, Tanveer Ahmed from JD (S) Anees Ahmed from SDPI, Akbar Ali, from the Welfare Party of India and Mohammed Nazeer from KJP participated in the discussion, followed by a question and answer session from the audience. U. Nisar Ahmed, IPS, former IG of police presided over the discussion.  Journalists, academicians, activists, students and women, thronged the BIFT auditorium, the venue of the discussion. Syed Tanveer Ahmed, editor, Karnataka Muslims anchored the programme and the welcome address was delivered by architect, Zafar Mohiyuddin of Zafar Associates. With elections to the Karnataka Assembly, just around the corner, the political parties were supposed to spell out their understanding of the issues being encountered by the Muslims, and offer solutions. None of the political parties and their representatives had any concrete idea to offer about their perception about Muslim issues in the State, at the end of hours of discussion. The programme was co-sponsored by Karnataka Urdu Reporters Forum, DBS Human Rights Foundation, Shaheen Group of Institutions, Bidar, Zafer Associates, Architects and Interior Designers, Makhazan Weekly and United Builders and Developers.