Good Samaritans in Chennai and Bengaluru set up facilities for people to deposit excess food, and the needy can pick up the same. 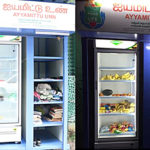 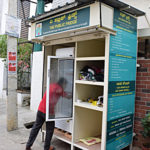 Bengaluru: In an unique initiative, the Chennai-based Public Foundation started its first ‘The Public Fridge’ in Bengaluru where excess food from households could be left in packets and needy people can pick up the same without being asked any question.
The first such ‘Public Fridge’ was set up by Dr. Issa Fathima Jasmine in Besantnagar area of Chennai in August this year. The success of the venture inspired Mr. Harish Kumar, a labour law consultant in Bengaluru, to replicate the model. It cost around Rs. 1.25 lakh for Mr. Harish to buy the fridge, provide power supply, install it in front of the apartment which he owns and where he lives, and also set up a side shelf where people can leave clothes, books and shoes or anything of need that is of no use to them.
The initiator of the project, Dr. Issa Fathima Jasmine, who spoke to Islamic Voice from Chennai, said she thought of experimenting with the novel idea of setting up a fridge in a public place where people could leave excess food (please note, excess food! not food leftovers) and needy people could collect the same. Dr. Jasmine said it was bringing together those who had excess food with them and those who actually needed it. She named the scheme “Ayyamittu Unn” in Tamil. What does it mean? It simply means ‘Share the food with the needy, before you eat’. It is a one-line poem written by poet Avvaiyar and has been taken from his poetry collection Aathichoodi.
Dr. Jasmine said she was often disturbed to see people disposing excess food, even well-prepared delicacies, into municipality waste bins, adding to the garbage that attracted dogs, flies and kites to feed upon and create a mess in the area. On the other side, there were people who lived on sidewalks and in slums, who went to bed hungry and had nothing to feed to their kids. She thought of these twin issues, and there evolved the idea to install a fridge in a public place and appeal to the residents to deposit the excess food in packets. As a rule, only vegetarian food was accepted as quality could not be ensured for non-vegetarian dishes.
The Public Fridge has been in operation for three months in Chennai. According to Dr. Jasmine, nearly 80 to 100 people deposit food packets in the ‘Public Fridge’, which she set up in Besant Nagar on August 20 this year. The beneficiaries on an average day number around 80, mostly those who are footpath dwellers or construction workers. A security guard is always on duty to ensure smooth operations. Jasmine says it is never the case of food packets remaining within the fridge for more than a few hours. In fact, most packets are picked up by the needy immediately after they are deposited. The side shelf gets a constant supply of good quality clothes and shoes which the needy pick up as and when they chance to see something that they need.
Dr. Jasmine has set up the Public Foundation, a charitable organization, which hopefully will be setting up two more ‘Public Fridge’ units, at Alandur and Ashoknagar localities of Chennai.
Harish says those who come with food packets have to write their name of the food dish, when it was cooked and its expiry date on a card provided by the security guard who affixes the same on the packet. The needy need not do any formality. They can just pick the packet up and depart. Harish says he had thought over the issue of hunger gnawing millions in urban slums and management of excess food in affluent households for some time and got in touch with Dr. Jasmine after searching for a solution on the net. He says that those who have excess food are embarrassed to ask if anyone would accept it, and those who need it to satisfy their hunger feel shy of expressing their need.
Harish’s Public Fridge and the side shelf began receiving ample quantity of food, clothes, books and shoes on day one itself. In fact, when this writer visited his Fridge, a resident deposited a tray full of chocolates that remained after a kid’s birthday ceremony had been over at his residence.
For more details, Contact:
Dr. Issa Fathima Jasmine, Chennai: Ph: 9884466228.
B. Harish Kumar, Bengaluru:
Ph: 9341941349.