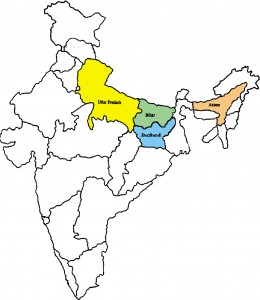 New Delhi: Over Rs 292.97 crores of the Members of Parliament fund is lying unspent in 70 Lok Sabha constituencies of significant Muslim population across the country. While Congress MPs of these constituencies still have over Rs 92 crores unspent, the MPs of BJP come at No. 2 with the unspent Rs 79 crores. Nishakant Dubey (Godda, Jharkhand) and Shafeequr Rahman Barq (Sambhal, Uttar Pradesh) top the list of best performers by spending almost all the funds available to them. Kirti Azad (Darbhanga, Bihar) is the worst performer as he still has Rs 7.43 crores unspent amount, which is less than 40% of the funds available to him. Devidhan Besra (Rajmahal, Jharkhand) and Badruddin Ajmal (Dhubri, Assam) have left more than 50% of the available funds unused. While Besra has Rs 6.74 crores unspent amount, Ajmal has Rs 6.65 crores, reveals a report prepared by TwoCircles.net. According to the report, which is based on data available on government websites, Muslim MPs in the Lok Sabha have not fully utilized the Members of Parliament Local Area Development (MPLAD) funds. Shafeequr Rahman Barq (Sambhal, UP) tops the list of Muslim MPs by spending almost all of 12 crores at his disposal. There are 16 Muslim MPs who have unspent amounts between 4 and 7 crores. Badruddin Ajmal (Dhubri) tops the list with 6.65 crores unspent. The Muslim population ranges from 20 to 95 per cent in the 70 Lok Sabha constituencies covered in the report.