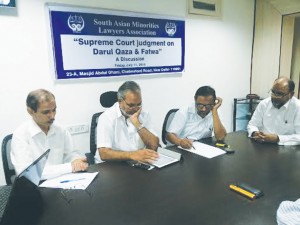 New Delhi: Hailing the recent ruling of the Supreme Court on Darul Qaza and Fatwa, prominent Muslim lawyers and intellectuals said that it has been largely misreported by a large section of Indian media giving wrong impression about the judgment. At a symposium here, they unanimously opined that the observations made by the Apex Court on the status of Darul Qaza and fatwa need to be publicized in the masses in order to dispel misgivings and misconceptions about Sharia laws and Islam. They also urged the Ulema and concerned institution to introspect themselves in the light of Supreme Court’s observations.
“It is a historic judgment that has removed many cobwebs around the legality and efficacy of Darul Qazas and ruled that it is not a parallel judicial system and not ultra- virus of the Indian Constitution”.
The discussion on “the SC judgment, Darul Qaza and Fatwa” organised by South Asian Minorities Lawyers Association (SAMLA) at its office here. Participants said the SC observations have dispelled the misconception about fatwa and Darul Qaza among people and vindicated the Indian Muslims’ stand on the issue.
Dr. Syed Qasim Rasool Ilyas, former spokesperson and member of the Executive Council of All India Muslim Personal Law Board, said that the Supreme Court has upheld the stand of the Board. “Supreme Court’s view on fatwa and Darul Qaza are more or less in conformity with the views of Board, the government stand before the court on the issue are also on the same lines”, Dr. Ilyas added.
Slamming the media for misreporting, he said the judgment has dispelled doubts about the Darul Qaza as the Supreme Court has rejected the demand of disbanding “sharia court” and issuance of fatwas. There are 44 Darul Qazas run by the All India Muslim personal Law Board, 80 by Imarate Sharia Assam, some 175 by Imarat-e-Sharia in Bihar and Orissa and West Bengal. Andhra Pradesh and Karnataka have their own Darul Qazas.
Quoting extensively from the judgment, he said SC observes: “The stand of the Union of India is that Fatwas are advisory in nature and no Muslim is bound to follow them. Further, Darul Qazas does not administer criminal justice and it really functions as an arbitrator, mediator , negotiator or conciliator in matters pertaining to family dispute or any other dispute of civil nature between the Muslims. According to the Union of India, the Darul Qazas can be perceived as an alternative dispute resolution mechanism, which strives to settle disputes outside courts expeditiously in an amicable and in an inexpensive manner and in fact have no power or authority to enforce its orders and, hence, it cannot be termed as either in conflict with or parallel to the Indian judicial system. “In any event”, according to Union of India, “a few bad examples may not justify abolition of system, which otherwise is found useful and effective”.
While rejecting the petition, the apex court observed that “In the light we have observed above, the prayer made by the petitioner in the terms sought for cannot be granted. However, we observe that no Darul Qazas or for that matter, anybody or institution by any name, shall give verdict or issue Fatwa touching upon the rights, status and obligation, of an individual unless such an individual has asked for it”.
Talking to the Islamic Voice, noted jurist and expert on Sharia laws, Prof. (Dr.) Tahir Mahmood said the verdict was widely misreported in Urdu and English press. He said he was surprised when he received an e-magazine from US that reported the Indian Supreme Court had banned Sharia in India. However, he urged the Muslims not to rejoice over the judgment and they must take its real message and translate it into concrete action. “Muslims should also evolve ways and means to ensure that fatwas are issued only by real experts in religious jurisprudence”.
Speaking about the judgment, a prominent lawyer and Secretary General of the SAMLA Feroz Khan Ghazi said that Muslims should welcome the judgment and take the comments made by the Supreme Court in good faith and should adopt some corrective steps to impart more credibility and effect on the society.
“The judgment is a great service to the country; the judgment has elucidated the most misunderstood concepts of Islam like the fatwa. The judgment has held that fatwa is a legal opinion only which binds none except those who voluntarily agree to abide”, Feroz Ghazi said.
Concurring with him another prominent lawyer Farrukh Khan said that Fatwa has been understood by people as some kind of a “Dharmadesh” which implies some sort of command to follow; Fatwa is not a dharmadesh but only an opinion by an expert which others may or may not follow as per their choice. “Unfortunately, media did not present the contents of the judgment correctly which has caused much confusion not only among Muslims but also among the general society at large”, said another prominent lawyer Masoor Ali.
Retired IAS officer from Bihar Dr. M. A. Ibrahimi was of opinion that there was a need to spread awareness about the scheme of rights and duties contained in Muslim law for smooth running of family and society. “Institutions like Darul Qaza can be effective only if such awareness takes root among Indian Muslims society”, said Ibarhimi.
Noted lawyer and journalist Salar M. Khan said it is need of the hour that Ulema should be made aware of SC’s observations as they do haste in making fatwa without taking consequences into consideration. “We should not make ourselves a ‘laughing stock’ by issuing weird fatwas,” Khan said.
Participating in the discussion, M. Wasiq Khan, a young lawyer said that the system of Darul Qaza should be made credible and effective mechanism for resolution of family disputes in Muslim society as urbanization has loosened social control. “Muslims should approach institutions like Darul Qaza for resolution of family and civil disputes and should abide by their verdicts”, he said.
Many non-Muslim lawyers were also present during the symposium.