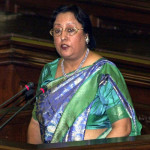 Patna: Union Minority Affairs Minister, Najma Heptulla launched the skill development centres at three madrassas in Bihar on August 30. It is the pilot project of the Centre’s plans to skill the minority community members with speed, scale and standards across the country. Maulana Azad National Academy for Skills (MANAS) will train the youth at Madrassa Idara-e-Shariah, Sultanganj, Patna (where the project was launched), Madrassa Anjuman Islamia and Madrassa Islamia Anjuman Rafaqul Muslimin, Motihari, a town in Champaran district of North Bihar.
MANAS aims at bringing together key stakeholders, including specialized trainers, leading industry bodies, community leaders and trainees to avail the benefit of quality training at one’s doorsteps. “Altogether 3,600 minority community students will get training through the pilot project in the next four months. Once the pilot projects take off, the scheme will be launched across India,” she said. The training programme will be monitored by MANAS-Project Monitoring Unit (PMU).
Heptulla said there was no reason for the minorities to feel threatened under the Narendra Modi government. “The PM has himself said there is nothing to worry. Were there no riots or unrest in Congress or RJD regime?” she asked. Union agriculture minister Radha Mohan Singh was also present on the occasion.  The training would be on par with standards set by the National Council for vocation Traning (NCVT) and training session in all centres would be monitord over the CCTV.