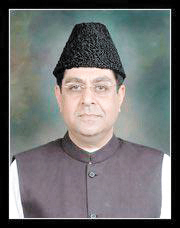 The elevation of Mohammed Siraj Ebrahim Sait as the National secretary of the Indian Union Muslim League on December 2, 2012 in Cochin, Kerala, is an indication that the party has woken up for a young and dynamic leadership. Siraj Ebrahim Sait is son of late Suleiman Sait and a resident of Bangalore, but a member of the Kerala Unit. “It is sad that in 1950, the party was branded as a communal organisation and as an architect responsible for Partition, which is not right. It was the Muslims of Kerala who realized the necessity of a political body which can represent the aspirations of the Muslim community in education and economy building. This has been well demonstrated in the last 65 years of post-independence period with the effective political consolidation of IUML in Kerala. Even today, we have demonstrated our strength during the seat sharing with the Congress. We made 24 of our contestants to contest and we won 20 out of 24, it is a thumping popularity of our effort in Kerala,” says Siraj Ebrahim Sait. Ebrahim boasts that IUML is the second leading force after CPIM. The party is likely to consolidate its position with existing members in 10-12 states. The aim will be to consolidate the Muslim and minority votes.