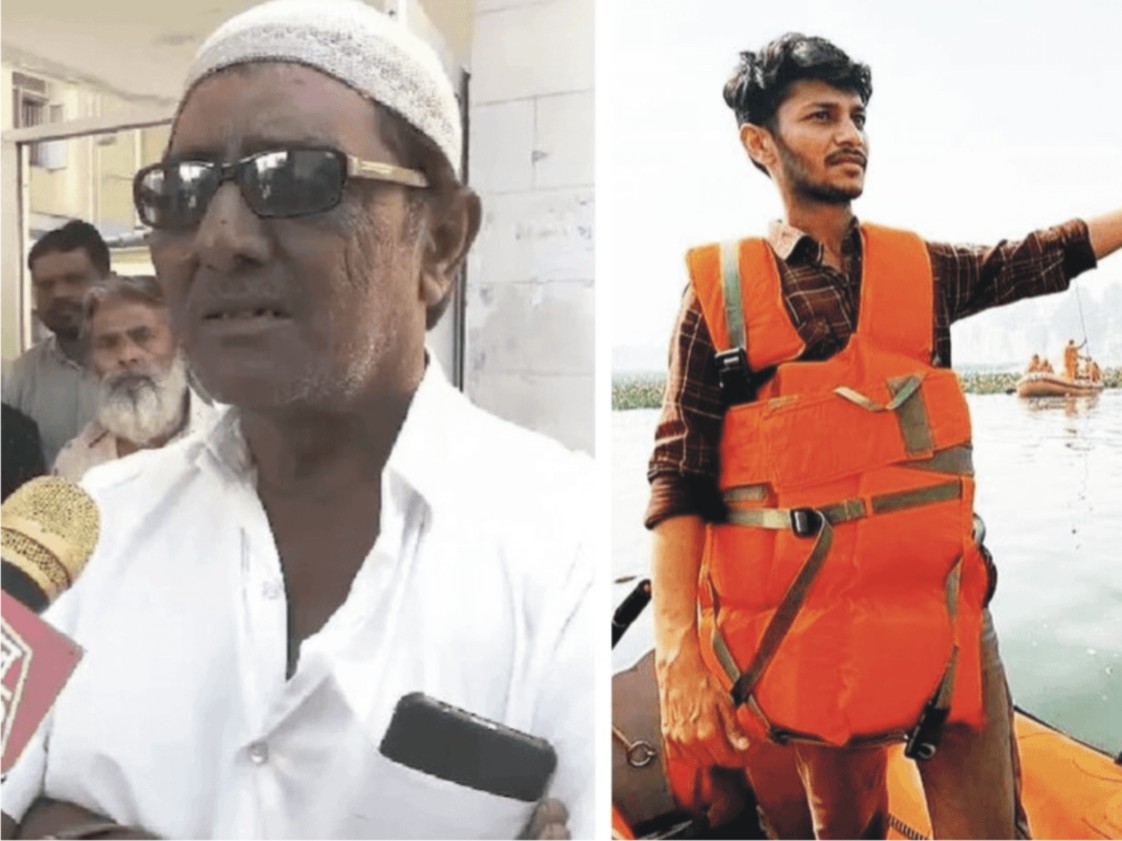 Gandhinagar/ New Delhi: Whereas the entire nation still struggles to comprehend the tragic occurrence in Morbi on October 30—where about 150 lives were lost as a result of a 15-year-old cable bridge collapsing into the Machchu River in Gujarat—the Muslim community of Morbi was able to save over 80 lives after the mishap struck. Hussain Mehboob Pathan, Taufeeq, Saddam, and Naeem were among those young Muslims who helped rescue lives risking their lives.

Around six o’clock in the evening, Pathan received a call saying that he was needed to save lives when the bridge supported by a wire collapsed. Being a skilled swimmer, Hussein sped out to the area and, putting others’ safety ahead of his own, assisted in bringing roughly 50 people to safety.

When the ‘Jhulato Pul’ (hanging bridge) fell and people began to drown, I received a call at six o’clock. Being a skilled swimmer, I dove into the water to save about 50 people, including babies and expectant women. I was present when the bridge collapsed, but I am unsure if there were as many as 700 people on it. Since the bridge was restored around seven months ago, I haven’t been there. I did everything I could to attempt to rescue as many lives as I could, Hussein told the media.

Another Muslim young man Saddam said, “I don’t know how to swim, therefore I didn’t save anyone from drowning but I supported others who were undertaking rescue efforts.”

“We have a skilled squad of 15 fisherman from the Miyana community in Morbi who are all excellent swimmers, and if any such catastrophe occurs, we hurry off to save lives. After the bridge collapsed, our community prevented about 80 people from drowning in the Machchu River, according to an elderly-looking resident.

One of Naeem Sheikh’s pals passed away while attempting to save a person’s life, according to Naeem Sheikh, who along with his friends rescued other lives. He said that between 50 and 60 persons were saved by him and his friends.

The Muslim teenagers who rescued lives were referred to be Heroes on Twitter.

“This is the befitting Reply to Merchants of Hate! Humanity Transcends all Religions’” Twitter said.

He lauded Muslim youths for their bravery and said they set an example for those who always harp on hatred against the Muslim community.

A delegation of Congress, including Digvijay Singh, Arjun Modhwadia and Gayasuddin Shaikh, paid a visit to the location.

The community of miyana fisherman in Visipara, Morbi, has been very helpful to the administration in carrying out the search and rescue operations following the accident. One Hassanbhai retrieved between 30 and 35 bodies from the river using his fishing board. He demonstrated the solidarity of Hindus and Muslims by not asking if the victims were Muslims or Hindus. We are grateful to everyone who has been so helpful. Digvijay Singh added, “We also want the government and administration to recognise and reward their valiant efforts.

The bridge had reopened on October 30 after seven months of repairs work.

Nine individuals from the Oreva group (Ajanta Manufacturing Pvt Ltd), which was awarded the contract for repairs and maintenance, have been detained by police in the meantime. Two managers, two ticket takers, two contractors hired by the business for repairs, and three security guards are among those detained.