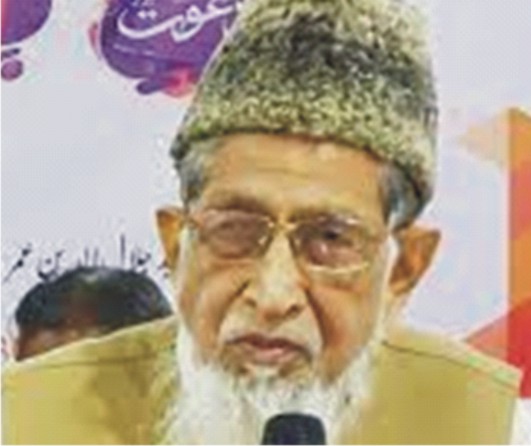 New Delhi: Renowned Islamic scholar Maulana Syed Jalaluddin Umari, former president of Jamaat-e-Islami Hind and author of more than two dozen books passed away at Al Shifa Hospital in New Delhi at around 8.30 pm on August 26. He passed away at the age of 87, leaving behind two daughters and two sons. His burial was performed in a nearby cemetery in Shaheen Bagh after his funeral prayer was held at the JIH Markaz mosque (Masjid Ishat-e-Islam), Abul Fazal Enclave, Okhla, and New Delhi. His funeral was attended by people from all schools of thought and community organizations.

While still a student, Maulana Umri started working with Jamaat-e-Islami Hind. He committed himself to the organization’s research section after finishing his studies. In 1956, he joined it formally. He served as the city Ameer of Jama’at of Aligarh for a decade and the editor of its monthly Zindagi-e-Nau for five years. Later, he was chosen by the Jama’at to serve as its All-India deputy ameer, a position he held for four consecutive terms (sixteen years). He was chosen as the Jama’at’s Ameer in 2007 by the Central Council of Representatives (Chief). He was chosen to serve as Jama’at’s Ameer once more.

Maulana Umari was rendering his valuable services as the chairman of the JIH Shariah Council since 2019. He was also Vice President All India Muslim Personal Law Board, a premier umbrella body of Indian Muslims. He was also the founder and Editor of the quarterly Islamic research journal – Tehqeeqat-e-Islami since 1982.

Being a noted Islamic scholar, educationist, researcher, orator, and author Maulana Umari has penned over 40 books in the Urdu language and contributed hundreds of research articles in various journals and magazines, on various topics including Islamic doctrines, Islamic jurisprudence, Dawah, Islamic social system, human rights, contemporary challenges, and political issues. Later, a large number of books were translated into various languages from the original Urdu ones which include:

He was widely considered, among the Islamic circles of India, an authority on human rights and the Muslim family system who wrote over two dozen books that were translated into various languages: