Our sense of history should not fall prey to communal propaganda. We should preserve the heritage of respecting each other’s religious places. 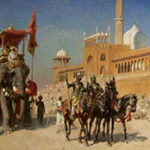 The Babri Masjid-Ram Janmabhoomi controversy created a false image in the public mind of Muslim rulers of medieval India as destroyers of Hindu temples. While a few wrong acts of intolerance may have taken place, the wider picture is one of a large number of temples being maintained or even built with the help of Muslim rulers. This fact is gaining increasing acceptance among historians.

Policy of Akbar
For example, let us look at the policy of the Mughal rulers towards the temples of the Vrindavan-Mathura region. This Hindu pilgrimage site was nearest to Delhi and Agra, the two main centres of Mughal rule; and so it is of significance to know the relationship which the Mughal rulers had with the temples of Mathura and Vrindavan and with their priests and devotees. Dozens of documents of those days are available to reveal the policy of Akbar,
Jahangir and Shahjahan towards these temples. These documents have been available in the Vrindavan Research Institute and in some of the temples. These have been studied by Tarapada Mukerjee and Irfan Habib in the papers presented at the 48th and 49th sessions of the Indian History Congress.
According to the study of Mukerjee and Habib, based on documents of Mughal days, Akbar enlarged and consolidated all grants to temples and temple-servants in the Mathura region by his Farmaans (dated August 27, 1598 and September 11, 1598) in Vrindavan, Mathura and their environs. Jahangir not only continued these grants, he substantially added to these. Jahangir added at least two temples to the list of thirty-five already supported by Akbar’s grant of 1598. In addition he provided 121 bighas of land for five families of temple Sevaks. Jahangir also visited the Vrindavan temples in 1620.

Temple Priests Approached Mughal Rulers
The documents mentioned further reveal that whenever the temple priests had any serious problem, they approached the Mughal rulers or their senior officials and generally the rulers/ their officials took action to solve their problems. On one occasion, the water supply to the Radha Kund was stopped; in an another case, a tax was imposed on the cattle kept by temples; in another case, some trees around a temple were cut; in yet another case gardeners of temples were subjected to forced labour. In all these cases complaints were made by priests or others connected with these temples to the Mughal rulers or their senior officials. And in all the above mentioned cases, prompt action was taken to solve the problems.
The fact that the priests appealed to the rulers/ officials even for problems which were not very important, indicates that they expected to get favourable verdicts from them.
In fact, there are documents to show that even when there were disputes among two priests or other religious persons connected with the temples, the intervention of Mughal rulers or their officials was sought to settle the dispute and the example of at least one such dispute between Damodardas Radhaballabh and Kishan Chaitan is given in a document.
The Nawabs of Oudh gave several grants to the temples of Ayodhya and provided them protection in other ways. The Diwan of Nawab Safdarjung built several temples in Ayodhya and arranged for the repair of other temples. Nawab Safdarjung gave land for the construction of a temple at Hanumangarhi. Asafadullah’s Diwan gave further help for the construction of a temple.
It should be added that several Hindu kings, not only those who were subordinate to Mughals, but also those who were independent, reciprocated this gesture. For example, Shivaji built a mosque in front of his palace in Raigad.
It is therefore important that our sense of history should not fall prey to communal propaganda, and the heritage of respecting each other’s religious places, as revealed in the examples given above, should be continued.
(Extracted from mainstreamweekly.net/ article6858.html)