Shutting the Scope for Debate
By Maqbool Ahmed Siraj 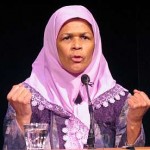 The University of Madras cancelled the lecture by American Islamic scholar Amina Wadud, perceiving a threat of violent disruption of the programme by some elements who had threatened to stage protest. The lecture was to be held at the Centre of Islamic Studies on January 29. Merely an sms to the Centre’s director P. K. Abdurahiman, from the local police was enough to stall the programme and turn back the Islamic scholar from the airport in Calicut where she has been under treatment for the last few months.
Amina Wadud is neither the first nor will be the last Islamic scholar to have been dubbed a heretic by fundamentalists, whose grip is tightening over freedom of expression in the Islamic world. That their threat to throttle free speech has begun to stretch as far as Chennai is a lament that urges us to sit up and take stock of the lengthening shadows of dark forces.
Ms. Wadud, a researcher on gender justice in Islam, has struggled for the three decades to stress the point that historical absence of women in interpretation of Islamic text does not mean their irrelevance. She has gone on to explain that just as women and men are seen as distinct within the Qur’an and within Muslim cultures, the women’s perspectives might be distinct as well. “One way to bring about a more complete human articulation of textual meaning would be to include women’s voices and perspectives within the interpretive process and to sustain those perspectives as integral to our intellectual legacy,” she has been asserting.
Amina Wadud is no writer and thinker of the category of Salman Rushdie, Ayan Hirsi Ali or Irshad Manjee whose rebellious writings have triggered passions across the Muslim world. Rather, she, the daughter of a Christian pastor, had converted to Islam out of her own volition. Her work mainly focused on uncorking the liberative spirit and energy of Islam. She has meticulously researched the resources that would unclog the minds that make Islamic text a perpetually sustained prison of male privilege. She has been doing all this in the hope that the Quran’s guidance for humanity remains pertinent to our age of phenomenal changes.
It was this quest that led her to lead Namaz in a mixed gender gathering of Muslims in 2005 in New York and later in South Africa. In the eyes of the Muslim clerics who presume the women’s role in society fixed and static, the act was seen as pure heresy. This ‘unpardonable crime’ by Ms. Wadud was seen as an invitation to rescue Islam from a male-dominated interpretation at best, and an ‘act motivated by enemies of Islam in the US’, at worst.
In doing this, Ms. Wadud was only acting out what the Prophet had himself sanctioned, but had become redundant ever since Islam became an imperial force two centuries later. Traditions from the Prophet Muhammad describe a woman named Umme Waraqah being appointed imam (prayer leader) of a mosque in her locality in Madinah and men having prayed behind her. This account occurs in the Sunan of Abu Daud and Masnad of Ahmed bin Hanbal. Noted Paris based Islamic researcher Dr. Muhammad Hamidullah records in his famous Bahawalpur lectures that she continued to lead the prayer till the final years of the second caliph Hazrat Umar i.e., close to seventeen years. (Ref. Muhammad Hamidullah, The Emergence of Islam : Bahawalpur Lecture on the Development of Islamic Worldview, Intellectual Tradition and Polity, Adam Publishers and Distributors, New Delhi, page 33).
Women continued to play prominent role in the socio-political and economic sphere for the next two hundred years. Caliph Umar appointed Shifa Bint Abdullah as the Head Controller (office ofMuhtasib) in charge of the markets in Madinah. Another woman, Samra Bint Nahik Asadiyyah was appointed to the same post in Makkah. Funeral prayer of Imam Shafii, the founder of the second most followed school of Islamic jurisprudence, was led by a woman, Nafeesah.
Far from the Prophet’s sanction to women to lead prayers, the Muslim society steeped in conservatism, does not even allow women to pray in the mosque. Muslim women today are caught between the misogynist interpretations of the Islamic law by ill-educated theologians and the misunderstood past that has been filtered through the eyes of the elite, resulting in their abuse in the family and the society at large.
Religious zealots have not hesitated to use blatant lies, that her previous lecture in Karur in Tamil Nadu and in Kerala created law and order problem. Credible sources from Kerala affirm that she has shared public platform with other noted Islamic scholars in Kerala without attracting any adverse reaction. She herself has said that she has never been to Karur and never spoken before in Tamil Nadu. Even her books have been translated by Calicut based publisher, Other Books. Unfortunately, most of these zealots have not read the books by Ms. Wadud and are led by the opinion of the obscurantist elements who have not read anything other than some sectarian view of Islam or the jurisprudence. It is also symptomatic of how intolerant the fanatics have become of the diversity of opinion within Islam and how disdainful are they of views that do not fit their viewpoint of Islam.
Alas, a wonderful opportunity to include women’s voices and perspectives within the interpretive process has been squandered by denying Amina Wadud her appointment to speak at Madras University. It will be in fitness of things that the University invites her once again and the enlightened denizens of Chennai stand by her side to allow those who wish to listen to such voice, however discordant they might be from the traditional discourse.