Islamic Voice 0 April, 2018 12:00 am
No Neutrality When it Comes to Truth and Democracy
Sri Lanka attacks bring together Muslims, Christians
Reforming Madrasa Education

Participants at the symposium expressed concern over increasing role of money and criminals in elections. 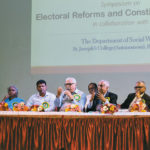 Bengaluru: A recent symposium on ‘Electoral Reforms and Constitutional Ideals’ evoked wide-ranging responses from a bevy of intellectuals and legal luminaries in the context of making the Indian democracy more representative of the diversity of its people. Speaking at the symposium, Mr. S. Y. Qureshy, former Chief Election Commissioner, opined that the current ‘winner takes all’ democracy is leaving vast sections of people unrepresented in the legislatures. He suggested the Proportional Representation (PR) system as in Germany could be one model for bringing reforms in the electoral system. He said the first-past-the-post system (FPPS) was a British legacy, which has been carried on for 70 years after Independence. He noted that at least 89 countries were following the various models of the PR system. Belgium had pioneered its introduction.
Proportional Representation
Qureshy said there were at least 20 variants of PR system currently in practice. He pointed out that women’s representation was a casualty in terms of gender balance under the FPPS. Quoting statistics he said, 36% of the seats in the national parliament of New Zealand were held by women, while it was 56% in Rwanda (which he attributed to special reasons of displacement of a major section of the population). Globally, the average women’s representation was 21% while the maximum representation that women had attained in the Lower House (Lok Sabha) of India was 11% so far.
The symposium was organized by Forum for Democracy and Communal Amity (FDCA) on March 17, in collaboration with St. Joseph’s College. Mediating the symposium, Dr. Taha Matheen questioned as to how the wealth of legislators keeps rising astronomically between two elections, quite disproportionate to their known sources of incomes, but yet no one was raising objections.

Role of Money
Mr. Trilochan Shastri of the Association for Democratic Rights (ADR) and a scientist at the Indian Institute of Science (IISc) said candidates and political parties were spending enormous amounts of money and there was no way the role of money could be curbed. “When candidates ‘invest’ crores of rupees in getting elected, they will naturally resort to recovering this money from the system, leading to corruption. Have we closed our eyes from this complicity between the moneybags and the politicians?” he questioned. He pleaded for countermanding the elections if there was a prima facie case of spending over the designated limit. He wanted certain structural changes in the system in order that candidates or parties could not be able to bribe voters.
Dr. Jyothi Raj, noted academician, said two important members of the Constituent Assembly raised the question of Proportionate Representation while the Constitution was being drafted. He said the Constitution was a basic legal framework and reforms must be brought out continually.
Father Augustine of St. Joseph’s College said that elections were breeding corruption, casteism, communalism and crime (which he termed ‘4 Cs’). He said the current Lok Sabha has 53 MPs with FIRs registered against them for having committed heinous crimes. He wanted the Election Commission to be empowered to suspend political parties which field candidates with criminal antecedents. He pointed out that the bigger political parties such as the BJP and the Congress do not feel the responsibility to be accountable.
Intervening on another occasion, Mr. Qureshy said an amendment has been quietly passed to allow foreign contributions to political parties with retrospective effect from 1976 with complicity of the BJP and the Congress Party because several cases were pending against the two parties under the provisions.

EVMs are Foolproof
Qureshy pooh-poohed the doubts raised against tampering of the Electronic Voting Machines (EVMs) and said it has been made further foolproof by the introduction of VVPATs. He said five experts from the IITs had carried out tests on the security of the machines and there was provision for checking the machines for accuracy at every polling booth prior to the start of the polling, in the presence of representatives of all the political parties.
Presiding over the symposium, Justice M. N. Venkatachaliah, former Chief Justice of the Supreme Court, hailed the Indian democracy where a General Election witnesses a million polling booths operating for 825 million voters to exercise their franchise. He recalled a New York Times write-up which while paying tribute to the Indian democracy by describing it as the ‘most robust’, had also termed it as ‘the rowdiest’. He called upon civil society to play a dominant role in order that the political society behaves properly.
(Reported by
Maqbool Ahmed Siraj)