Do not indulge in exhibitionism through bidding on sheep and goats for fancy rates and going for its publicity through the media. 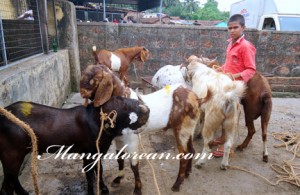 Idul-Azha or Bakrid will be upon us at the end of the first fortnight of October. It is time we prepare the community for pollution-free festivities. Besides environmental aspects, we also need to take care that rites and rituals attendant to this festival do not hurt the sensitivities of our neighbours who may follow faiths other than ours.
Festivals are occasion for sharing our joys. But in a plural society like ours, it is not necessary that rites of festival for one community will be acceptable to others at all, or at least in the same measure. It is therefore necessary that we look for others’ convenience and minimize the nuisance impact for them.
Idul Azha is the festival of sacrifice. It is necessary that we exercise extreme precaution in carrying our sacrifice of animals. To begin with, our cities and towns have expanded limitlessly. It is therefore essential that sacrifice of animals is kept to minimum and preferably carried out only in slaughter houses, farm houses or in villages. Collective sacrifice is recommended instead of individual ones.
Second, animals should not be tied in front of the houses or in streets prior to the day of the sacrifice. The municipal garbage collectors usually avoid sweeping streets inhabited by Muslims prior to and during Bakrid days merely because they expect them to be littered with animal related refuse such as their feaces, straw and leaves.
Third, those living in apartments should never attempt slaughtering animals there, even if the occupants of all the flats are known to be Muslims.  Sewage disposal system in flats is too fragile to take waste from animal sacrifice.
Fourth, avoid slaughtering animals other than sheep and goats as fascist vigilante groups active during these days let no opportunity of creating mischief slip out of their hands.
Fifth, if at all in-house sacrifice is the only option, do not make a show of it by doing it outside the house or on the streets.
Six, Go for safe disposal of the animal waste. It should not be dumped in water bodies, on to the streets or street corners. It should be packed in waste bags and disposed off only in large land refills or outside the towns or cities or be buried under mud in the garden or woodlands. Unsafe disposal is all likely to attract crows, kites, dogs, cats and insects besides inflaming passions.
Seven, don’t hang the strands of meat on clotheslines over terraces. Hide them under thin sheets of cloth, lest they become prey for kites and crows. Moreover, it is not a pleasant sight for others.
Eight, do not indulge in exhibitionism through bidding on sheep and goats for fancy rates and going for its publicity through the media.
Nine, take out a share for gift packs for even those non-Muslims in touch with you who covet  non-veg. food.
Ten, never attempt carrying carcasses of slaughtered animal on pushcarts, over two-wheelers and in any manner that outrages others’ sensitivities.
Eleven, donate the sacrificial skins to charitable organizations or educational institutions with reputed credentials. It is not true that only madrassas deserve to receive them.