Movies in Mumbai have played a negative role in projecting the image of Muslims as extremists and perpetuating them. 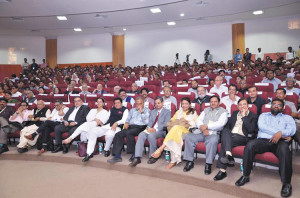 Veteran journalist Mr. N. Ram, former Editor-in-Chief of The Hindu underscored here on March 17, the need to undertake research studies on the deviation of the media from the guidelines enshrined in the constitution.

Maligning Must Stop
Speaking as the Chief Guest at the inaugural session of the two-day international conference on ‘Muslims, Media and Democracy”prospects and challenges’ at Maulana Azad National Urdu University (MANUU), Hyderabad, Mr. Ram said that the few studies that have been done in the aftermath of the demolition of Babri Masjid in 1992 and the pogrom that took place in Gujarat in 2002 have indicated the heavily biased role played by a section of the media then. Hindi and Gujarati media agencies did not realize that they have to present an objective picture of the situation. They both took sides that inflicted immense damage to the secular ethos of the country. But no proper study was taken up to find out why that serious deviation of the principled path had taken place.
He offered assistance from the Chennai based Asian School of Journalism to MANUU for taking up research on issues of national importance, particularly related to minorities and their language. He also advised the Muslims to follow the model of Tamil speaking Muslims in Tamil Nadu and Sri Lanka who have become some of the finest scholars in that language.
Four eminent journalists from Pakistan had joined their fellow Indian professionals to discuss issues related to Minorities.

Shekhar Gupta
In his keynote address, Shekhar Gupta, Editor in Chief of Indian Express, spoke about the inclusiveness and sweetness of the Urdu language and said that its speakers should try to enlarge the audience base by writing the language in Roman script too. He said that the allegation that Urdu was a foreign language which was exported to Pakistan during partition has no basis at all. It is a language of emotions that connects people with words of love.
Gupta who is also a popular TV personality said that the movies in Mumbai have played a negative role in projecting the image of Muslims as extremists and perpetuating them. The movie makers and media organizations should not indulge in maligning a community. They should be careful when they are dealing with sensitive subjects such as communalism.
He said that Muslims in India have followed leaders from other communities to resolve their social, economic and political problems. This positive sign should be highlighted, he suggested.

Rajdeep Sardesai
Noted TV personality Rajdeep Sardesai said that the TV channels are more worried about increasing their TRP and in the process consolidating negative images of groups of people including the Muslims.
He advised the media to strike a balance in reporting and should stay away from targeting or praising one political party or the other.

Lord Meghnad Desai
Noted Indian-British economist and political thinker Lord Meghnad Desai said that the Indian society should become bold enough to discuss, debate and celebrate its differences.
Describing India as a nation of nations, he said that even the Hindus who form the majority in the country are not without serious differences within their fold. “Relax, don’t worry. India will never break up. The divergence in India and its elasticity will keep it together,” he assured the audience that comprised media experts, academicians and students in large numbers.
The expert who flew in from Britain said that India will not allow any group of people to become an independent State. “The Union of India will never allow it because that is the basis on which the union is formed,” he said while addressing the valedictory session of the two-day seminar.
Lord Meghnad said that his perception of the Indian history changed when he first read India Wins Freedom by Maulana Azad because it gave an altogether different picture of who played what role in the partition of India. Since then it became clear that there cannot be ‘one unified monolith history’ of a nation though the schools would continue to teach a goody, goody history. Each group of people would have its own interpretation of history. But that is nothing to worry about as people would anyway would get to know what they look for. “India became a nation in a true sense of the term only when it became a republic in 1950 and it is still in the making,” he said. He described the story of Blacks in the USA as its birth mark, similarly partition of India is its birthmark.
Chancellor of MANUU, Mr. Zafar Sareshwala asked the Muslims to do introspection so as to understand limitations and overcome them. Prof. Mohammad Miyan, Vice Chancellor of e MANUU, asked the students to be tolerant towards differences, whatever could be the basis for that. “We should learn that humans have been bought with difference of opinion leading to diversity,” he said.