No Neutrality When it Comes to Truth and Democracy

Veteran Journalist Rajdeep Sardesai calls for retrieving moral authority to reestablish the credibility of the media. Values should be the axis for struggle, not an individual. 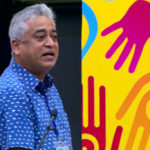 Building an Inclusive India is a very Relevant Issue.
Non-partisanship has become a burden for us, journalists. I often get invited for discussions like this where we cannot remain neutral. We are not activists and cannot take sides. But today when democracy and freedom of expression are under a threat, we cannot remain non-partisan. We must speak out. So I do not use the term ‘neutrality’ or ‘non-partisanship’, and instead use the term ‘objectivity’. Neutrality is no longer an option. You need to project facts and truth.
Two weeks ago I was in Bengaluru, covering the Karnataka Assembly elections. I had taken a seat in an Udupi restaurant on Richmond Circle together with a couple of friends. We had ordered idlis and vada with sambhar and chutney. I now mostly go to places like restaurants rather than covering election rallies where hired crowds are brought and netas deliver long speeches.
We were shooting for our news channel. Suddenly four guys, who seemed to be from some infotech company barged into the crowded restaurant and began to shout: “You are bloody anti-Hindu!, You are anti Modi!. Say, Modiji ki Jai!” But I kept mum. Even my producers counseled patience. No one rose from his seat to stop those guys. But the shouters streamed out soon enough. Immediately after they exited the scene, some people came to me and said: “Sorry Sir, This is not Bangalore. They do not represent Bangalore.” I, on my part, told them I too understand the city and appreciate its ethos and cordiality of its people and know too well that these voices do not resonate with the people here.
Half an hour later, some police officer called me and informed that they had identified those guys who work for some MNCs. I appreciated their effort in tracking them. But around the evening, when I was retiring for the day in my hotel, I began to look for answers as to where is that basic decency and elementary courtesy among the people. How could some activists enter into a crowded restaurant and yell at a person accusing him of being anti-Modi, anti-Hindu and dub him anti-national. How the level of debate is plumbing the depth where anti-Modi, anti-Hindu and anti-national get merged into each other.
It all boils down to dissent being criminalized and demonized in the country. If one speaks against Mr. Modi, he can be dubbed anti-Hindu and anti-national. This hegemonic definition of debate has to be challenged. This is not samvad which has its origin in Varanasi. It is being replaced by vivaad (discord). If those four people would have sat with me and engaged in a dialogue, I may have appreciated their point of view. The things have come to this pass because this is how debates are being conducted on the TV channels and even in social media. The TV channels decide prior to the debate as to who would be the enemy today and who needs to be targeted. It could be Kanhaiya Kumar one day and some poor Archbishop the other day. Even on a day when a dozen people are shot dead by police in Tuticorin, the TV channels were engaged in debating if some Archbishop is an enemy.
The long and short of the matter is that the space for dissent is shrinking and the urban middle class is its greatest victim. The foot soldiers of this phenomenon are educated youth, who may not be like the Prime minister, but they have degrees. They may even have acquired degrees from some American universities. Degrees are no guarantee for basic civility. These degree-holders may follow some magician and one believes in what he says is the ultimate truth.
The issue is how to build an inclusive India. You will have to tackle the urban middle class India. It is like a brainwashed army. We must speak out and speak out more often. It is not that the democracy is over in this great country of ours. You cannot be the silent majority. They got 31% votes, yes, but they have the government with them. If you are a journalist, you may face challenges like your increment may be stopped if you spoke out the truth. But think of those four judges, one of whom was to be elevated as the next Chief Justice, who came out and spoke. Who stops the people from speaking out? Democracy is alive in this country. It is not like China.
Secondly, we must build contacts with others. We are now confined to our own eco-chamber of our whatsapp groups and get into euphoria by getting some Meme and sharing jokes about Modi or his government and flag the thumbs up sign. We may feel pleased with all these and declare that Modi is losing the ground and India is changing. But do not forget that there are thousands of other groups which present views contrary to yours.

The question is how do we take this discussion of Inclusive India forward?
I had been to Kerala where some elections are due for the civic bodies. People are very angry there. If you ask Adityanath, he will say the people are angry with Jinnah. But if you ask me I will tell you that they are angry because Ganna (sugarcane) farmers have not been paid dues for the last 10 years. I even met a few sugar mill-owners. One of them was a Muslim mill-owner and another was a Jat. But most factory workers were either Dalits or Muslims. Now since mill-owners do not get the arrears for their sugar, they can neither pay the sugarcane farmers nor the mill workers. Yet these issues do not become the topic for discussions. Who will connect these dots? We keep talking about the politics which runs from one election to another election. See how Ajeet Singh, Jayant Choudhury and RLD are seen only when there is an election in Kairana. Cannot the civil society groups take this up?
I had been to Raichur in Karnataka. The women were agitating for supply of drinking water and wanted prohibition of liquor to be imposed. Similarly, the leader of the Bheem Army Chandrashekhar has been detained under the National Security Act which was a hot issue in Kairana election. Dalit youth who are his followers are very angry. He is not being supported by anyone. The Bahujan Samaj Party would not plead for his release as he is seen as a challenger to the BSP leadership. Nobody is defending him.
Take Tuticorin. The agitation against Sterlite was on for the last three months. But it shot into prominence only when police fired upon agitation and killed them. We will have to take up these issues. This is how the real issues were neglected during the Congress rule for the last 30 years. The focus should be on issues of equity and justice. Since secularism was exploited by the earlier governments, the current dispensation has mobilized the masses against the concept.
If we have to change the situation, we will have to take the inclusive India from this Constitution Club and involve with the people gripped with misery. This will not be possible in a month. Don’t be misled by those twenty leaders of disparate political groups who held hands in Bengaluru.  This is an opportunistic alliance. That will be there. The leaders would keep on doing it. This cannot be around one issue of Kathua or Unnao.
If indeed one inclusive India has to be built, then we will have to be active all 365 days of the year.
A few more thought at this occasion. The journalists are being divided into left wing, right wing, or among Congress-sponsored or BJP-sponsored ones, just as the people are being polarized. We are journalists. We should hold mirror to the politicians and should neither make him appear golden or dark. He should be projected as he is. We have to show that the emperor has no clothes.
We have to hold the mirror against all those in power. Let us go to West Bengal where Mamata Banerjee has been threatening those who voice dissent. If I post a message on the Facebook in West Bengal against Mamata I can be jailed. We must protest against her. A doctor was removed because he did precisely that. Should we not protest against her? Our protest should be against the whole system, not against an individual. We will recover moral authority to speak up against the erring individuals. The greatest challenge is to raise a moral leadership. You will have to raise your voice against Mamata for curbing democracy in West Bengal just as you do with the Marxists or the right wing. We journalists have not done it. That is why we lost credibility. Our newsrooms have been divided. The anchors are now dubbed pro-Modi or anti-Modi. I am none of them. I just want to hold mirror against those who are in power as the media is by its nature anti-establishment.
Note: This piece is based on veteran journalist Rajdeep Sardesai’s address at the Building an Inclusive India : Citizen’s Conclave held at the Constitution Club on May 25, 2018.