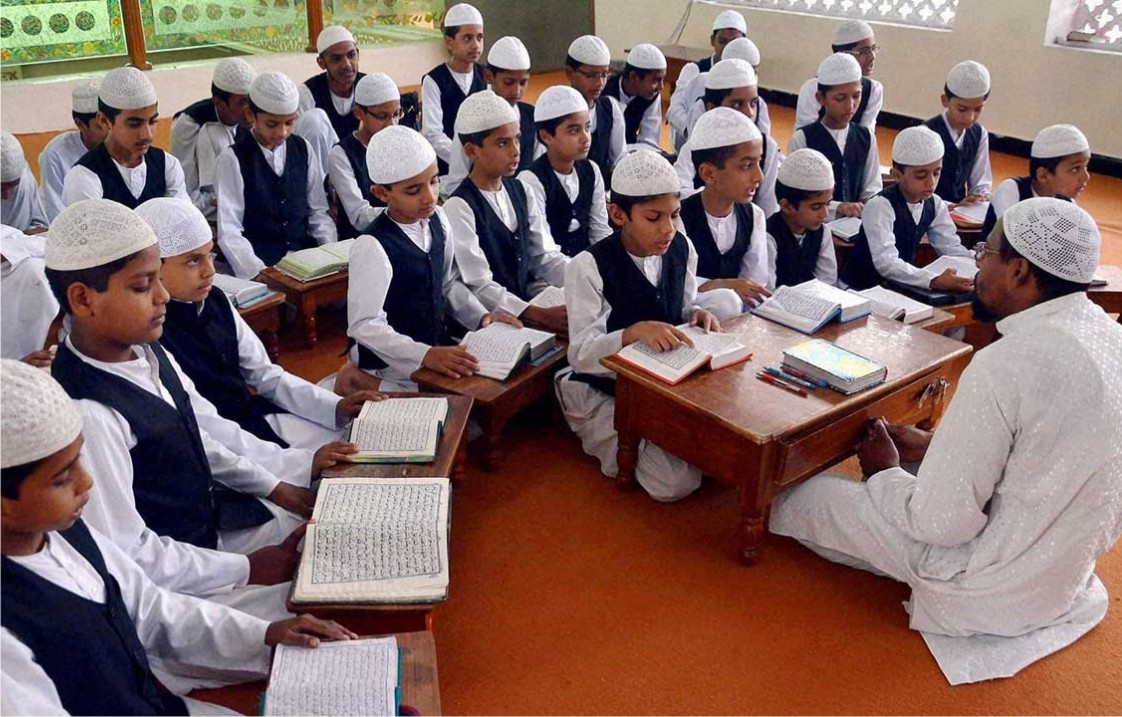 In discussions about Muslim education, the subject of madrasa education is often raised.

In Arabic, the word madrasa means a school. In the distant past in India, besides knowledge of religion, madrasas also provided knowledge of languages and various sciences. But over the years, madrasa education in India came to be dominated by religious leaders. And now, madrasas, by and large, are known as places where only what is conventionally regarded as ‘Islamic education’ is provided. Today, the vast majority o fmadrasasfunction as Islamic schools.

A large number of madrasas have been set up in India during the last 100 years and more. Most of them were established by individuals who had themselves passed out of a madrasa. Most madrasa students come from economically weaker sections of the Muslim population, from families who cannot send their children to an excellent regular school. Many madrasas provide free food and shelter to their students and also free religious education. These madrasas are funded mainly through charity that is inspired by religious sentiments.

Madrasas in India today have become a subject of considerable discussion. Overall, the system of madrasa education remains very conservative. There are significant madrasas, which are called Jamias. These are higher-levelseminaries for older students. Generally, theJamias provide a course that extends fromseven to ten years. The graduates they produce turn out to be religious scholars and leaders, but often with little, if any, training in modern education. Despite years of study, they often lackthe skills necessary to interact meaningfully on the broader society.

Bihar and Uttar Pradesh, in particular, have a large number of madrasas, and a sizeable number of young men pass out from these institutions every year. Many of them cannot find any jobs outside the ‘religious’ sector. Most of them do not possess any skills required for employment outside that sector. Hence, most of them are absorbed as madrasa teachers, imams (prayer leaders), muezzins (callers to prayer) in mosques, and so on. The only alternative for many of them is to start a madrasa of their own by collecting donations.

In the Mughal period, besides what are now regarded as specifically ‘religious’ or ‘Islamic’ subjects, many madrasas taught subjects that are today conventionally considered ‘secular.’ But with the advent of British rule, English-medium schools took the place of madrasas for many. Christian missionaries took the lead and established many such schools in various parts of India. The Madrasas remained confined to teaching subjects such as Arabic, the Quran, and Muslim jurisprudence. Many madrasa authorities vehemently opposed English and Western-style education. This led to a segregation of education between Muslims and others, causing Muslims to fall far behind.

One crucial issue that the Muslim community must work on is to reform the madrasas. Generally, when well-meaning people advocate ‘modernization’ of madrasas or the restructuring of madrasa education, it is not their intention that Muslim religious education be done away with. Religious education is, in fact, as essential for Muslim children as is basic secular education. Both are required. Unfortunately, however, there is considerable confusion among the ulemaon the issue. Some erroneously think that modern education cannot or should not go side by side with religious education. There is a pressing need to change this perception.

Here are a few suggestions for reforming madrasa education:
1. In addition to teaching their syllabus, all madrasas should facilitate their students to geta basic secular education. Madrasas should arrange to have their students also enrolled with the National Institute of Open Schooling (NIOS) and thereby enable them to complete their 10+2 by the time they leave the madrasa. After that, it should be left to the student to choose the specialization theymay want to take up.
2. There should be an authority constituted with the consent of leading Muslim scholars to regulate madrasas’ setting up.
3. Every madrasa should also offer skill development courses.

(The author, who is based in Bengaluru, is a former Union Minister and a former Member of the Rajya Sabha)