Media complains that Muslims have no proper spokespersons 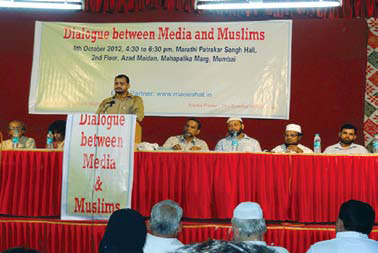 When a Muslim girl student tops the MD exams for medical colleges, the media does not mention it because she is in Burqa but news about Afzal Guru is splashed all over the newspapers. A dialogue between the media and the Muslims was organized by the Qaumi Majlis and Shura Mumbai on October 4 at the Marathi Patrakar Sangh Hall. The object of the discourse was to lessen the distance between the media and the Muslims especially after the August 11 Azad Maidan violence in Mumbai . I was invited for the program by Danish Reyaz who writes for the magazine Sunday Indian. On one side were Muslim community leaders and intellectuals while on the
other side of the panel were journalists. Among them were Sujata Anandan, the political editor of The Hindustan Times , Jyoti Punwani , Jatin Desai and others. Danish started off the debate by saying that there is this perception that the media portrays Muslims in a
negative light, to which one from the Muslim community panel pointed out that when a Muslim girl topped in the MD medical examination the media did not report the incident. The student herself explained the reason for being ignored : she was in Burka. But news about Afzal Guru was splashed in every newspaper. Sujata Anandan said, there is a difference between Islam and Islamists. While the media has no problem with Islam, it is the Islamists who bring politics into religion and demonize Islam which shoots off trouble. She further said, Journalists dilemma is that while covering issues about Muslims, it is difficult to find a proper spokesperson for the Community and it becomes very difficult, to penetrate it to get the facts. ‘There are so many groups among Muslims and there
is no one strong spokesperson for Muslims whom Journalists can contact for information’, she opined. Acknowledging leading Journalist Saeed Naqvi as her Guru, Anandan said when violence erupted in the Azad Maidan rally in which media personnel were attacked, an she called up Naqvi in Delhi and asked him why have the Indian Muslims done this. Responding to her query, Naqvi replied that there is no such thing as Indian Muslim. Naqvi further explained that all Muslims were not the same therefore it is unfair to paint all Muslims with the same brush.

‘We have the Tamils, Bengalis, Gujaratis  in India. Similarly we have different kinds of Muslims. If some anti social elements create problems in Pakistan, the non Muslims here start develop a negative perception about Muslims in India. Anandan said Islamic evangelist Dr. Zakir Naik had made fun of Lord Ganapati. The Shiv Sena let the matter pass, because its leader Bal Thackeray was old
and ailing. “Had the Shiv Sena taken it seriously, there would have been riots in Mumbai”, said Anandan. Journalist Jyoti Punwani said the English press makes a stereotype of Muslims as being violent and aggressive. But a change has come about over the years. With umpteen number of young Muslims entering the field of Journalism, Muslims were now not presented in the same light. ‘But still
there are not many Muslim journalists in the English press”, she observed. Punwani said scribes in the English newspapers write whatever they get from the police. Police perception of Muslims is not good so the writing ends up to be a biased one. Holding
the Urdu press responsible for August 11 violence in Mumbai, Jyoti Punwani said it published fabricated or totally wrong pictures of disturbances of Assam and Myanmar. “If Samnaa, the mouthpiece of the Shiv Sena is communal what about the Urdu press?” she
asked. Even though there is a bias against Muslims among the police force, the Urdu press projected former Police Commissioner of Mumbai M. N. Singh as the savior of Muslims .  “Media does not belong to one religion,” said Jatin Desai from the Journalists side. “‘We have to get out of this conspiracy theory”, said Desai. “Every time something disturbing happens in India we blame it on America or Israel. This must stop”, he pleaded The president of the Press Club of Mumbai, Gurbir Singh had a poignant experience to share with the audience . He said in a Borivili suburb in Mumbai, Muslims and Hindus were living in peace and harmony. There was a close bond between them. There was a redevelopment project for the slum-dwellers. The then Minister Naseem Khan wanted three separate buildings for Muslims although the Muslims themselves did not want it. This demand for separate houses for Muslims was struck down and Hindus along with Muslims continued to live jointly in the same area. Moral of the story: though Hindus and Muslims may want to live together peacefully, politicians for their own vested interests will create a rift between them. From the Muslim community side Dr. Shariq Nisar of TASIS, a Shariah BSE index, said, western secularism means breaking the barriers among religions and Indian  Secularism means bashing up other religions. “The problem in the mainstream media is the lack of critical investigation into matters pertaining to Muslims .” he said. Athar Khan, President of the Centre for Islamic Education in Bhopal said, ” The media does not focus on the action but on the reaction of the Muslim Community”. The debate ended with all agreeing that the interaction between the
media and the Muslims which Danish Reyaz had taken pains to  organize, was very enlightening and must continue.