Think Tanks – Must for Deciding a Trajectory

Islamic Voice 0 July, 2016 12:00 am
What Can We Learn From Pope Francis as Muslims?
Terrorists are Anti-Human, Anti-God
Islam is Opposed to Terrorism 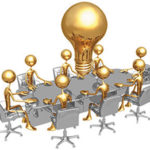 Think Tanks are institutes for study of policies. These are mostly non-profit institutes and are funded either by Governments, corporate bodies or political and ideological groups. They are constantly engaged in development of new ideas, formulating policies, determining strategies and promoting and advocating certain ideas.
In today’s world, nobody exists as an individual or a family. Collective interests need to be identified and promoted if the nations have to prosper and create their place in the comity of nations. We live in a world where diverse interests prevail and policies are shaped by those groups which can think cogently, put their ideas in perspective, conduct debate and finally turn their ideas into public policy and law. However genius an individual might be, he cannot dominate a society or a nation. Public policy is the final essence of ideas projected and advocated by several groups.
All Western nations have richly invested in Think Tanks. Though Think tanks started to come up in the early part of the 20th century, the trend became stronger after the Second World War when nation-states realized the necessity to coexist with rival nation-states, reconcile their interests with interests of their neighbours and look for ways to build peace and establish security.

Long Term Focus
Carnegie Endowment for International Peace and Brookings Institutions were among the earliest Think Tanks in the United States. Germany, France, Russia, China and India have set up hundreds of Think Tanks for research on issues pertaining to Defence, Security strategy, environment, technology, science, social diversity, etc. These bodies are engaged in study and research on trends influencing contemporary politics, economy, technology and science and issues pertaining to, say, Global Warming, energy sources, maritime security, cyber security, knowledge dissemination, new means of communication etc. Think Tanks mostly stay away from public limelight and do their work quietly by gathering inputs from resourceful people, institutions and other sources. They are different from universities and research institutes in that they do not conduct courses or offer degrees. They have a long term focus with an eye on influencing the course of a nation. They publish studies which are widely debated and discussed in the media as well as academia.

Networked World
Since we live in a highly networked world, all our affairs are shaped by socio-political and economic trends emerging in various societies and the way science and technology are throwing up new discoveries or etching to relief new issues. For instance, if the seas are warming up, there would be defreezing of ice on two poles, change in weather in areas like Tundra or icy waste of Russia’s north, etc. While these may inundate coastal areas in several countries around the equator, it may turn vast regions in Canada, Russia, Iceland and the United States into lands that can support agriculture. It may even make several ports in Scandinavian countries, Poland, Russia and Canada navigable and useable throughout the year. It may drive away polar bears and penguins but become attractive for birds from afar. It may enable mining in new areas. It may turn the climate hospitable for new viruses and turn soil friendly for cultivation of new crops, fruits and vegetables. It is quite possible for a country to lose land to the sea and cause cramming of people in narrower pockets of land or even encourage infiltration into neighbouring countries leading to social tensions, economic worries and political disequilibrium. An environmental Think Tank will usually look at all these possibilities, opportunities and vulnerabilities in a comprehensive way. Be it development of nuclear capability, new modes of transportation, rising cultural output in a specific nation-state, export of labour or technological talent by a particular country, development of new source of energy in a region, rise of aggressive religious or ideological forces all need to be looked from the policy angles by every nation. The Think Tanks develop adequate response and strategies to counter threats, or suggest ways to affect changes or develop adaptations.

Three Ones or 111
Not merely the States, even political parties need to have Think Tanks. They have to keep an eagle’s eye on emerging trends and amend their policies accordingly. Those who avoid doing this, are in danger of turning obsolete, out of sync with times and being rendered irrelevant, to say the least. Badiuzzaman Said Nursi, the progenitor of the current ruling party in Turkey had famously said: “It is proved that today is the time of community. Collective personality dominates. In olden times, since the corruption came from one person, one genius guiding people to the true faith would suffice. But today, it is a collective personality in the form of a community, so only a collective personality can confront it.. “However great the geniuses of the persons are, they may be defeated by the genius of community rising from its collective personality…Yes, if three alifs do not unite, they have the value of three, whereas, if they do unite, through the mystery of numbers they acquire the value of one hundred and eleven.”
Think Tanks in India
Several noted Think Tanks have been founded in India in recent decades. Observer Research Foundation headed by Sudheendra Kulkarni in Mumbai is funded by the Reliance Industries. Vivekananda International Foundation (VIF) has been set up by people close to the RSS. People holding important positions in the Central dispensation today like Ajit Doval (National Security Advisor), Bibek Debroy, P.K. Mishra and Nripendra Mishra are products of VIF. Centre for Science and Environment (CSE) in Delhi is a Think Tank dedicated to ecological issues.
Only very few Muslim countries have bothered to set up Think Tanks. Turkey, Iran, Indonesia and Malaysia have a few Think Tanks. Among the oil-rich Gulf nations, only UAE has a single Institute that could qualify for a Think Tank. Other Muslim countries have Think Tanks that could be counted on fingers.
Major Challenges
The major challenge before the Muslims is to devise ways to align themselves with the new world where concepts like Nation-State, Pluralism, Democracy, Secularism, Freedom of Expression, Inclusion of all, Globalisation of economy dominate. The issues need adequate responses. It is plainly evident that the community cannot conduct its affairs with rules framed a millennium earlier. Laws need to evolve as society has been dynamic. Cultural onslaught of the West has to be countered. The education system needs a complete revamp with incorporation of creativity. More than anything else, the ummah needs to evolve a pattern whereby it could preserve its genius even while operating from the precincts of Nation-state and without giving a scare to others.