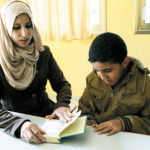 Gaza (Palestine): A ten-year-old Palestinian boy from Gaza, Abu Musa despite suffering from autism has memorized the whole Quran in just one year. Autism is a neuro-developmental disorder characterized by impaired social interaction, verbal and non-verbal communication, and restricted and repetitive behavior. Parents usually notice signs in the first two years of their child’s life. An educational expert, Nedve Abdulal, from the private school where children with autism undergo rehabilitation, has said that the Gazan child, Khalid Abu Musa memorized the whole Quran by listening to the verses being read to him repeatedly. Abu Musa has also learned to read and write, despite these things being extremely difficult for children with autism. In addition, he has been able to communicate with other children and play games, according to Daily Sabah.