India’s disability movement will not be the same again. 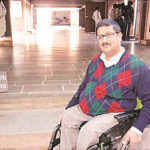 I wonder if 50 years down the line, India’s disability movement’s timeline will be viewed as before and after Javed Abidi. The unexpected passing away of this colossus a few days back has shaken all “ from activists who were his contemporaries to reporters wondering aloud on Twitter about whom to ask for quotes in future coverage of disability.

Reality of Employment Discrimination
So where do we begin? With the young boy with spina bifida in Aligarh who was to become a wheelchair user by the age of 15, his supportive family steeped in academia and politics, the America years of treatment, rehabilitation and study in the heady pre-ADA age disability advocacy, the return to India and reality of employment discrimination, sacrificing his passion to be a political journalist when approached by Sonia Gandhi to set up the disability wing of the Rajiv Gandhi Foundation because “quitting journalism would not harm the industry, but refusing the offer would mean turning my back on so many things that I was angry about “ not my disability, but the attitude of people to my disability”.

Workaholic Lifestyle
The anger was to burn steadily for over 25 years and combined with his single-minded focus, workaholic lifestyle, audacity of thought and what he called the courage of conviction resulted in an astounding legacy that had very little to do with the positions he held. Yes, he founded the National Centre for Promotion of Employment for Disabled People (NCPEDP), was convenor of India’s oldest disability advocacy collective, Disabled Rights Group (DRG), filed his nomination as an independent candidate for the New Delhi Lok Sabha seat in 2004, formed the National Disability Network, edited the Disability News Information Service (DNIS) and became Chair of the global powerhouse “ Disabled Peoples’ International.
One could argue that these posts were mere markers of the man. By acerbic, provocative yet relevant journalism in DNIS, by rousing passionate calls to arms in emails, his personal favourite as he mellowed, the candlelight vigil, and periodically, in Delhi’s face, visible mobilisations of disabled people, often from across the country to swell and amplify the sector’s spirited and vocal protests, fasts and processions, he brought into being both of India’s primary disability laws “ the landmark Persons With Disabilities (Equal Opportunities, Protection of Rights and Full Participation) Act, 1995 as well as the more recent and contentious Rights of Persons with Disabilities Act of 2016.
Legal advocacy was to lead to the Supreme Court mandating barrier-free elections for voters with disabilities; consistent in-person engagement with bureaucracy resulted in the inclusion of disability as a parameter in the Census, which he singlehandedly managed to escalate to among the first 10 questions in the 2011 census.
There was training and mobilisation of the disabled corps, budget advocacy and the push for disaggregated data on disability, helping the Department of Disability Affairs build capacity by training for its flagship Accessibility India Campaign, roping in corporates for the country’s highest honour for work in the disability sector, the Helen Keller awards, introducing architects and website designers into universal design, commissioning reports and policy papers.
Above all, was Javed’s personal motto, the old disability slogan”Nothing About Us, Without Us. From the Planning Commission to mainstream policy-making, if there was representation of disabled people, it was due to Javed’s work. He thundered repeatedly for the rights of the disadvantaged global south in what he perceived as the Europe and North America dominated hegemony.

A Benevolent Autocrat
Javed was king and unconscious king-maker. He honed his chosen people’s natural skills and passions, turned them into globally respected experts, while functioning like a benevolent autocrat. No doubt his authoritarian side achieved a lot more than a more democratic process. They say nature abhors a vacuum, and while Javed’s presence will be missed, he has set the stage for a group of people who are more than equipped to oversee the disability movement in India through its proclamation of civil rights on an aggressive anti-discrimination footing.
The king is dead, long live the movement.
(The writer is member of Disability Rights Alliance and co-founder of The Banyan, an NGO that works in the area of mental health).
(indianexpress.com)