“Whenever I get to know that someone in a family or friend or relative is suffering from cancer, I go and speak to them.” Abdul Jabbar Ponnodi 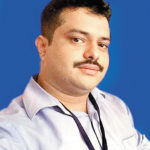 Bantwal (Karnataka): When 30-year-old Abdul Jabbar Ponnodi from Bantwal was 20 years old and wanted to complete his UG course like many of his friends, he developed back pains. Medical tests revealed that Abdul had developed a rare form of cancer. “Gradually my legs lost strength, I lost bladder control. I was bedridden. I was operated upon, and after radiation therapy as well as chemotherapy for nine months, my condition improved. With almost two years of physiotherapy, my legs started regaining strength. With the help of special shoes, I started moving around, started using the scooter and also started working as a salesperson in a mobile phone shop,” he says. He also started emceeing for programmes, worked on developing a mobile application for an online portal and was active on social media as well as writing short poems. In the last ten years, he has been counselling patients at a private nursing home and has also formed a WhatsApp group where they collect funds to help needy patients.
“Whenever I get to know that someone in a family or friend or relative is suffering from cancer, I go and speak to them. Disease should be restricted to the body and not to the mind. The body can be treated, but not the mind. It is important for people to follow a diet that has more natural food and avoid preservatives,” he says.
(Extracted from www.bangaloremirror.indiatimes.com)