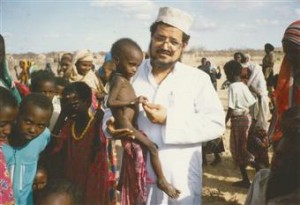 Abd Al-Rahman Al-Sumait, who helped thousands of Africans understand and embrace Islam, constructed 5,700 mosques and four universities in Africa, passed away last month. He was 66. He was awarded the King Faisal International Prize in 1996 in recognition of his Islamic and humanitarian services. “Arab media has ignored this great man and did not give much publicity for his humanitarian activities in Africa. He is a model of a good Muslim who applied Islam to spread goodness, love and harmony in the world,” said Mahmoud, an Egyptian commentator. Al- Sumait had sponsored 15,000 orphans and constructed 9,500 artesian wells in Africa. Born in Kuwait in 1947, Al-Sumait studied medicine in Baghdad University, obtained a diploma in tropical medicine from Liverpool University, and specialized in internal medicine and gastroenterology in Montreal General Hospital in Canada. He conducted research on hepatic malignancies in King’s College, London. He worked briefly as a consultant gastroenterologist at Sabah Hospital in Kuwait before dedicating his full time to humanitarian activities. As a young student, Al-Sumait witnessed a scene outside his school that sparked his interest in helping the less fortunate, and this changed his life forever. He observed poor workers waiting for their means of transportation in the heat on a daily basis. He purchased a car with the support of some friends and drove these workers for free.