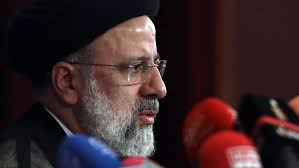 Ebrahim Raisi is the Newly Elected President of Iran

The 60-year-old Rasisi will take office in August. He promises to combat corruption and solve the economic problems Iran has experienced under the outgoing President, Hassan Rouhani. He is the current head of the country’s judiciary.

In 2017, Raisi surprised observers by standing for the presidency and lost to Rouhani, a fellow cleric who won a second term by a landslide victory, receiving 57% of the vote while Raisi came second 38%. However, He secured a crushing victory, winning 62% of the vote in the first round this time.

After the revolution, when Ayatollah Khamenei became Iran’s president in 1981, he joined the judiciary and served as a prosecutor in several cities.

Ebrahim Raisi born in 1960 in Mashhad, Iran’s second-biggest city at the country’s holiest Shia Muslim shrine. Raisi’s father died when he was five years old. His wife, Jamileh, teaches at Shahid Beheshti University in Tehran, and they have two adult daughters.