Maidul Islam’s dedication to football proves that leading a focused life goes a long way in reaching your goals, be it in football or in life. 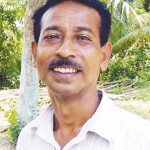 Calcutta in the late 80s and early 90s used to know him as a soccer celebrity. A couple of decades passed since then. A commonplace, Maidul Islam today smiles, “Football makes you ready to face any eventuality”. Asked about the pain to be away from spotlight, he burst into laughter, “I did never seek pleasure from under it. Football is my goal. Why should I buy pain to be away from it today?”
Born at Udaypur, a sleepy hamlet in Panskura sub division, East Mednapur, West Bengal, Maidul used to frolic like passing wind. “I used to kick the ball and gather the same in one go”. “In Calcutta, Abba had been a state government employee. Calcutta was not my eye-popping experience. I got used to the air. I frequented the city from childhood days. The moment you find yourself eat, walk or play with a Hindu, or a Christian, or a Buddhist, be sure you’re in Calcutta,” says Maidul. He was a champion runner of undivided Midnapur already. This feat somehow assured him a place in team Sonali Shibir, a 1st division football club in Calcutta in 1986.
Years passed. The jerseys of different hues spoke of his club identity each year. The city of Calcutta is the home of mini and great derby. Maidul’s maturity brought him into the centre stage of derby. In 1988, he made his debut in a mini derby. It was a goalless draw in between Mohamedan sporting vs. Mohan Began in IFA league meet. The following year saw Maidul’s team come back with flying colors in mini derby. Maidul signed for Mohan Began in 1990. Unfortunately his leg injury did not let him play in great derby, the match in between Mohan Began vs. East Bengal.
Maidul took off to Nepal in 1991. International Kathmandu club was overjoyed to welcome him. A couple of years’ stay in Nepal took him to China and Bangladesh. The shy village boy truly became a cosmopolitan. Back home in 1998, Maidul got married to Anwara begum.
“Tall lanky, Md. Habib”, Maidul loiters down the memory lane, “from Hyderabad was a couple of years’ senior to me, so were Akbar, Jamshed Nashiri. Later Habib bhai was conferred the Arjuna award”. Maidul had been a blue-eyed boy to his coach, Amol Dutta in Mohan Began.
“Politics had been a closed book for me”, confessed Maidul. It started all of a sudden. “Some friends of mine from the then ruling red brigade trooped into my house one fine morning”, laughs Maidul. Panchayet election 2005 was on the cards. “I didn’t have to struggle. I got elected with a CPI(M) ticket from my village, Udaypur. Later the elected Panchayet members selected me as the headman of Chaitanyapur 2 village Panchayet in 2005″.
“The only apology, I’ve in family life”, Maidul looks a bit upset, “is the absence of a daughter”. Maidul with three sons and their mom form the picture of a happy family. “Where is football today?” I asked. “Why?” The footballer argued, “I am a farmer too. Earth is round. Isn’t she?”