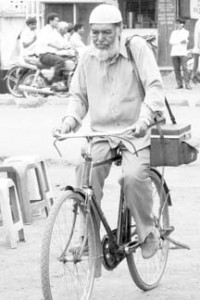 Bidar: Veteran lensman Ghulam Muntaqa, often known as photo-magician among the fraternity of journalist died on March 17. He was 77. Muntaqa through his photo-engineering with a number of cameras had captured important personalities and events in marvelous and often amazing settings. For over six decades, this reclusive kind of a man, shot people and places producing stunning images. His revolving camera captured the famous Gateway of India and the Taj Mahal Hotel in Mumbai by panning over a panorama spread over 360 degree on a eight feet by one foot bromide. It was also employed for capturing the outgoing legislators of Karnataka’s Legislative Assembly. Looking like a junk box, the camera had been picked up by him from Bombay’s Chor Bazaar at the price of metal it had. It is said it was once used at the Oxford University.
His photographs of earthquake in Latur and Osmanaabad and the kerosene tanker inferno brought him laurels.
Muntaqa was son of a police photographer in the erstwhile Nizam Government of Hyderabad and began to shoot from the age of 12. He remained unmarried and is survived by nearly 300 cameras and a vast number of photographs of yore.
Dr. P. K. Abdul Azis, former Vice Chancellor of the Aligarh Muslim University has been appointed the new vice chancellor of the University of Science and Technology of Meghalaya established in 2008. It will be a 3-year tenure. Dr. Azis demitted office of vice chancellor of AMU in early 2012. An industrial marine biologist, he previously headed as the vice chancellor of Cochin University of Science and Technology. During his tenure, the AMU made strides by setting up centres in Malappuram and Murshidabad.