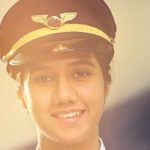 Her dream was to do something challenging and unconventional. Ever since she was a child, Ayesha Aziz knew she wanted to fly a plane. At 16, she fulfilled her dream by becoming India’s youngest woman pilot. Ayesha, now 20, says, “More than being India’s youngest pilot, I am happy for having accomplished my childhood goal.” Based out of Mumbai, the fondness for the flights and airports grew in her when she would visit her native — Kashmir — twice or thrice every year a year since she was a child. “While I would enjoy take-off and landing of the plane, my brother would be scared and always sleep during the flight.” n her batch of 40 at Bombay Flying Club in Bombay, where she is pursuing her BSc third year in Aviation, there are only four women. She adds, “You should hold your head high and not let others put you down.” She would get her commercial pilot license after she completes her BSc for which she has to complete 80 hours of the total 200 hours of flight. She joined the flying school after she completed her Class X. She took her ground classes and cleared the five viva sessions. Immediately after turning 16 in October, she got her student pilot licence in November 2013. But due to some monetary issues, her training for commercial pilot licence got delayed. She currently flies single engine Cessna 152 and Cessna172. Her encouraging family is the reason behind her success. She says, “When I told my father I wanted to be a pilot, he pushed me into it immediately after completing my Class X.” She says it’s great to have understanding parents.