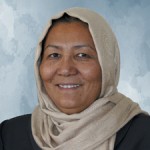 Afghanistan’s first and only female governor Habiba Sarabi is one among this year’s recipients of the Ramon Magsaysay Awards, often regarded as Asia’s version of the Nobel Prize. The Manila-based Magsaysay Awards Foundation chose 57-year old Sarabi for helping build a functioning local government and pushing for education and women’s rights in Afghanistan’s Bamiyan province despite working in a violent and imporverished environment in which discrimination is pervasive. Public education and the ratio of female students have increased in her province, where more women are taking up careers that were forbidden under the 1996-2001 Taliban regime.
The awards, named after a popular Philippine president who died in a 1957 plane crash, honor people and groups who change their societies for the better.
“In the face of widespread hostilities towards women assuming public roles, her courage and determination are outstanding,” the foundation said of Sarabi, a member of an ethnic and religious minority in Afghanistan.