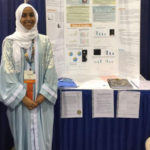 NASA has recently named one of its asteroids (Al-Sheikh 33535) after a young talented, female Saudi scientist, in recognition of her efforts and excellence in her research within the Botany field, for which she won the second place at Intel International Science and Engineering Fair (Intel ISEF) last year. Fatima Al-Sheikh won the second place in 2016 after being nominated at the level of Saudi Arabia for winning the National Olympiad for Scientific Creativity held annually by King Abdulaziz and his Companions Foundation for Giftedness and and Creativity (Mawhiba), in partnership with the Ministry of Education. She was then ranked second in the US for research in the field of Botany entitled, “Determination of Effectiveness of Innovative Strygolactone-Carl2-on Seed Germination of Parasitic Weeds”. “This achievement comes in the light of Mawhiba’s commitment to its mission of supporting Saudi talented people, providing them with outstanding care, and enhancing the passion for science and knowledge,” a statement on Saudi Press Agency read. Al-Sheikh is not the first Saudi woman to win recognition for work in science. Saudi student, Sara Alrabiah won the top award of NASA’s ISEF competition this year, that brought together 1,700 researchers.