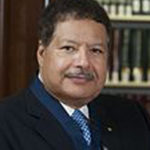 Ahmed Zewail received the 1999 Chemistry Nobel Prize. He is the first and only Arab to win the Nobel Prize in science.
Egyptian-American Nobel Laureate, Ahmed Hassan Zewail known as the ‘father of femtochemistry’ passed away in USA on 2 August 2016. He leaves behind many science breakthroughs and an enduring legacy. A military funeral (broadcast live on television) was held for Zewail on 7 August 2016 in Cairo, Egypt. The funeral prayers were led by Ali Gomaa, former Grand Mufti of Egypt, at the El-Mosheer Tantawy mosque in Cairo.
Ahmed Hassan Zewail was born on 26 February 1946, in Damanhour in the delta of the river Nile, Egypt. He received a Bachelor of Science (1967) and Master of Science (1969) degrees in Chemistry from Alexandria University, Egypt. He then moved the United States, where he did PhD (1974) from the University of Pennsylvania, Philadelphia under the supervision of Robin M. Hochstrasser. He then did post-doctoral research at the University of California, Berkeley, supervised by Charles Bonner Harris. In 1976, he was appointed as a faculty member at the California Institute of Technology (Caltech), Pasadena. He was made the first Linus Pauling Chair in Chemical Physics. He became a naturalized citizen of the United States on 5 March 1982. Zewail served as the director of the Physical Biology Center for Ultrafast Science and Technology at the California Institute of Technology.
Chemists have long studied chemical reactions by looking at the ingredients they start with, the final products they produce and, sometimes, transitory molecules along the way. But chemists could not watch the actual dynamics of the process, because the breaking and shifting of chemical bonds occurs very quickly at the time scales of femtoseconds. A femtosecond is a millionth of a billionth of a second. Zewail took advantage of advances in lasers that could fire ultra-short pulses. One laser pulse would set off the chemical reaction, then a second pulse would record the state of the molecule through the colours of light the molecule absorbed and emitted. Using Zewail’s techniques, scientists can now observe the bonding and busting of molecules in real time. This technique developed by Zewail is likened to Galileo’s use of his telescope which revolutionized modern astronomy. Ahmed Zewail received the 1999 Chemistry Nobel Prize. He is the first and only Arab to win the Nobel Prize in science. On that occasion he said, “If you can understand the landscape of a chemical change or a biological change, you might be able to alter the landscape”. He received many awards including the 1989 King Faisal International Prize for Science (in the subcategory physics with the co-winner Theodor Wolfgang HÃ¤nsch from Germany). In 1999, he received Egypt’s highest state honour, the Grand Collar of the Nile. Egypt issued postage stamps in his honour.
In 1999, Ahmed Zewail initiated the major project known as the Zewail City for Science and Technology in Giza, Egypt, (www.zewailcity.edu.eg). In 2009, US President Barack Obama named Zewail, to the Council of Advisors on Science and Technology and later that year made him the first US science envoy to the Middle East. He joined the United Nations Scientific Advisory Board in 2013.