Sheikh Makhmur Shakir Ansari (28), an English teacher in New Delhi, surprised hundreds of onlookers in a village in Purnia district when he arrived as a bridegroom on a bullock cart. After a quiet wedding, there was a simple vegetarian feast for 25 select guests. Ansari said he decided to have an austere wedding inspired by Bihar Chief Minister Nitish Kumar’s call for wedding sans dowry. He said he cut down all ostentations and saw to it that the marriage expenses did not go beyond Rs. 2,000.
“I fully endorse Nitish Kumar’s campaign for a marriage without dowry and wanted to set an example. Many families have turned pauper. So we (Ansari and his bride Tarana Kausar) decided to go in for a simple wedding,” Ansari told the media after the wedding.
The newlywed couple now wants to focus on educating their fellow villagers.
“Very few people in this part of Purnia are graduates. Both of us would like to help educate people in this Muslim-dominated area where the literacy rate is below 40%,” Ansari said.
The guests were also made to take an oath to neither accept nor allow anyone to accept dowry.
“The two social evils ” dowry and child marriage” are the biggest stumbling blocks in a society,” Ansari added.

Rana Ayyub’s “Gujarat Files’ Wins Citation of Excellence
Johannesburg (SA): Journalist-turned-author Rana Ayyub received a Citation of Excellence in the 2017 edition of the Global Shining Light Award for an undercover investigation revealing India’s top officials’ complicity in the 2002 Gujarat Riots in her book, “Gujarat Files: Anatomy of a Cover Up.” The citation was given at the Global Investigative Journalism Conference on November 18 in Johannesburg, South Africa. The prize honours investigative journalism conducted in a developing or transitioning country, done under threat, duress, or in the direst of conditions. Along with Rana Ayyub’s “Gujarat Files: Anatomy of a Coverup,” another investigation that exposed an arms pipeline between Central and Eastern Europe and the Middle East worth ¬1.2 billion in “Making a Killing,” also received the citation of excellence. “By honouring the extraordinary work of these journalists at risk, we pay tribute to all the good work being done in so many places where courageous journalists keep the flame of watchdog reporting alive,” noted Sheila Coronel, Academic Affairs Dean of the Columbia University Graduate School of Journalism, one of the judges. The award drew 211 submissions from 67 countries for stories published or broadcast between January 1, 2015, and December 31, 2016. The Global Shining Light Award is sponsored by the Global Investigative Journalism Network, an association of 155 non-profit groups in 68 countries that work to support and spread investigative reporting. 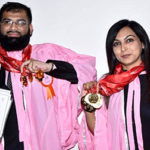 Sultan Moiuddin Shaukat Ali, a student of Dr Vasant Pawar Medical College Nashik topped the Maharashtra MBBS final exams and bagged 14 Gold Medals in various subjects. In a double delight for Dr Vasant Pawar Medical College, Mansi Mayuri Gujarathi of the same college bagged 7 Gold Medals and came second. Sultan Moiuddin bagged the 9 Gold Medals in various subjects of final year and topped the Mahatarshtra University of Health Sciences (MUHS). He also bagged 5 medals as consolation prize. He was awarded the medals at the 17th Convocation of MUHS by Maharashtra Medical Education Minister, Girish Mahajan. Dr Sultan Moiuddin also received a cash price of Rs.10,000 from Johnson and Johnson Mumbai. Sultan Moiuddin, who hails from Palghar and comes from a humble family background, completed SSC with 93% of marks from Rana English High School. He passed HSC from Azam Campus Pune scoring 94% marks. Ever since his childhood he wanted to become a doctor. But, poor economic condition of his family was the hurdle to fulfill his dream. Hence he took admission in an engineering college. One day he received a phone call from his mother. He said everything is fine but “he is feeling uneasy” and repeated his desire to become a doctor”, according to Inquilab. His mother called him back. Back to Palghar, he started preparing for CET and passed the entrance test scoring 172 marks, and got admission at Dr Vasant Pawar College in Nashik.
People 488