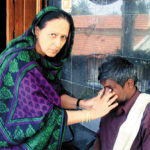 Rehana Banu administering kajal with herbal paste to a victim

Where modern medicines have failed, her herbal formula has worked. Rehana Begum of Turuvekere in Shivamogga district has saved from jaws of death around 25,000 victims of snakebite, just by applying kajal mixed with a herbal paste into their eyes. She is however not a doctor, but a housewife, tending to domestic chores and raising a family just as a common woman would do.
Snakebite victims are rushed to her house in odd hours from villages in surrounding districts. All that she does is to mix the herbal medicine with kajal and apply into the eyes of the victim. The victim feels burning for ten minutes during which tears keep rolling down the cheeks, taking away the venom. The victim is all right within ten minutes and ready to resume the normal routine of work.
Old Formula
Known for her treatment of snakebite victims in the region, Rehana Begum charges no fee. She is the fifth generation descendant of the family to practice the treatment, which mother of her great grandmother had known through her access to old manuscripts of medicines. Rehana has been into this for the last 40 years when she was just 15. Although the formula was passed on to her sisters too, Rehana alone has been successful in carrying on the family legacy.

Honoured
She was presented the State’s highest honour, Karnataka Rajyotsava Award in 2005 and Kittur Rani Chennamma Award in 2014 for her public service. On March 18, she was presented with Cigma Social Service Award at the 6th NGOs Conference in Bengaluru.
Mother of three daughters (one among whom is a medical doctor) and a son, Rehana Begum’s door is always open for all, at all hours, regardless of any religion or community. No one has ever been turned back. Even during family related ceremonies, people bring victims to her and she attends to the victim with a priority.

Crucial Three Hours
Talking to Islamic Voice, Rehana says, most of the victims are farmers or workers from plantations or those working in mines or land related job. The formula has worked wonders and taken her fame far and wide. However, the victim needs to be brought to her within three hours of the bite. He should not have taken water and the portion above the bitten spot should have been tied with a cord. The victims are advised saltless and non-spicy food for the next three days during which they are not even supposed to take milk related items. Even while rushing the victims to her clinic, the attendants should ensure that he does not sleep.

Referred Cases
Among those who were cured is a owner of a major theatre in Shivamogga, several teachers and government employees. In several cases, reputed hospitals have referred cases to Rehana Begum and found her herbal forumula healing them back to health. In one case, a young cleaner of a tourist bus was left to die after he was bitten by a snake in the field while he went there to ease himself. People in the area who saw him lying half-dead, brought him to Rehana Begum where he was administered the treatment immediately and got back into action. In another instance, a bridegroom was bitten by a snake a day before marriage and was cured of the venom, allowing the family to proceed with the festivities.
The herbal formula is a family secret. Asked would it not help larger number of people, if the family shares the formula with some pharmaceutical in order to make the medicine available to all. Rehana says, “Sharing the formula with anyone would commercialise it and unscrupulous elements will reduce it to a trade and ruin it ultimately.
(Rehana Begum can be contacted on ; Cell: 98869-64650, Son Asif Nawaz: 94484-16753.)